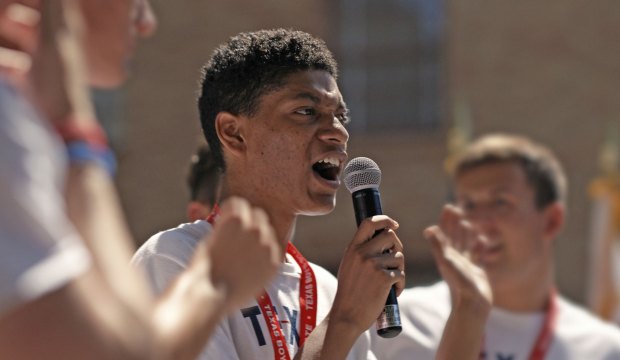 Males under the age of 18 can’t vote in the upcoming U.S. elections, of course, but, as the new Apple TV+ doc “Boys State” notes, 17-year-olds have their own electoral smackdown – and it’s ferocious.

The mock elections (separate ones for boys and girls) have been staged by the American Legion in nearly every U.S. state since 1937, but now focus in this doc is aimed specifically at the Texas branch for boys, tracking 1,100 local teens who gathered in Austin in 2018 where they split into two political parties (Nationalists and Federalists) to create their own brand of government during the weeklong annual summer camp.

The boys must build their government from the ground up. Everyone is randomly split into the two parties, and they are tasked with creating their own platforms, nominating a legislature and officials and eventually facing off for the top prize of governor. Experiencing this gripping microcosm of teenagers provides an entertaining and insightful commentary on American politics, masculinity, and modern versions of the American Dream.

“Boys State” garnered early praise by winning the Grand Jury Prize at the 2020 Sundance Film Festival, where it also became the largest sale of a documentary out of any festival at $12 million to Apple and A24. Apple has also recently asserted itself as a force among streaming platforms in the awards conversation by acquiring Martin Scorsese’s “Killers of the Flower Moon” and the Antoine Fuqua–Will Smith Cannes collaboration, “Emancipation,” for a combined total of $305 million.

The Apple-A24 partnership will also be releasing Sofia Coppola’s “On The Rocks” later this year, pending a possible COVID-19 delay. All of these acquisitions show Apple TV+’s continued promise to spark conversation among viewers, especially by releasing “Boys State” 80 days before a polarizing election.

The directors, Amanda McBaine and Jesse Moss, scouted for documentary subjects way before the boys arrived in Austin. They were successful in finding three of the doc’s four boys — Ben, Steven and Rob, who play critical roles throughout the week. The fourth, René, inspired the directing duo during one of his initial, rousing speeches in running for party chair and became the final piece in their vision for a hopeful, dynamic voice.

This program engages the boys in furious debate and manipulates the intensity of partisan politics in a condensed format in order to embolden them with camaraderie and self-confidence. The allure and power of the film lies in watching these young and future leaders unite, argue and motivate each other toward a common purpose.

Consequently, the hypermasculine speeches and limited viewpoints of a mostly conservative and white assembly highlight the problem of an overwhelmingly patriarchal society. One of the boys goes as far to say, “Our masculinity shall not be infringed!” Steven, the son of an undocumented Mexican immigrant, and René, one of the only black teens participating, represent the diverse strength of minorities in America that will fight to be heard and respected in a sea of boys indoctrinated by an outdated class of leadership.

The final race for governor boils down to two different tactics in vying for votes: Steven’s unifying altruism (“We need to show what we can do if we talk to each other and work together”) and Ben’s smear campaign (“A message of unity, as good as it sounds and as good as it ultimately is for our country, isn’t winning anyone any elections. You have to use personal attacks and you have to find divisive issues in order to differentiate yourself at all”). The implications of these messages, the boys’ backgrounds, and the election outcome magnify the issues of our current political climate and leave the viewer contemplating the means for sparking lasting political change.

While the winner’s reign depends on appealing to a majority of voters, the end goal isn’t to have their policies enacted. The 2017 group’s decision at Texas Boys State to secede for the first time in the program’s history may have inspired the filmmaking couple to make this film, but it didn’t have any lasting repercussions. Alternatively, the power of unity in completing the program is meant to inspire them to continue their politically charged path and achieve real change through leadership in their post-high school careers.

McBaine and Moss have created an engaging and powerful statement about American politics in “Boys State.” The film’s harrowing introduction relates Aldous Huxley’s “Brave New World” and George Orwell’s “1984” to the importance of government and its effect on individual freedom. Seeing these boys mature and enact change more successfully than some of our current politicians proves that actual reformation is possible. So even though “sometimes you can’t win on what you believe in your heart,” as Rob chillingly states, the film ultimately leaves you hopeful for a better tomorrow.