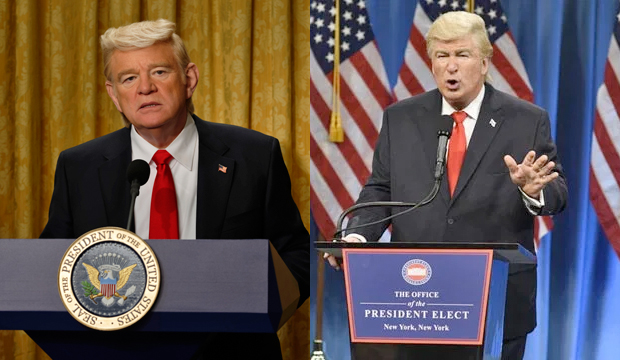 Ben Mark Holzberg/Showtime and Will Heath/NBC

The wild hair. The orange skin. The constant sniffing. No, we’re not referring to Alec Baldwin‘s Emmy-winning gig as Donald Trump on “Saturday Night Live.” Instead, it’s Brendan Gleeson‘s turn to take on the U.S. President in “The Comey Rule,” Showtime’s miniseries from writer/director Billy Ray that depicts the downfall of former FBI director James Comey (Jeff Daniels).

Gleeson gives a delicious performance as Trump in the second part of the two-night program, as inspired by Comey’s book “A Higher Loyalty.” The Irish actor already has one Emmy on his mantel for “Into the Storm” (2009), but could easily win a bookend trophy for his transformative supporting performance. Up first for Gleeson are major precursors like the Golden Globes, Critics’ Choice and SAG Awards, where “The Comey Rule” will compete as a limited series.

For those that devoured the Senate Intelligence Committee hearings in 2017 following Comey’s firing, none of the events of “The Comey Rule” come as a surprise. Whether it’s the President being in full “mob boss” mode when he demands loyalty from the FBI director, or instructing him after National Security Advisor Michael Flynn gets into legal trouble to “see your way clear to letting this go,” politicos won’t be able to look away from this adaptation.

But what about awards voters? It’s no secret that Hollywood loves when left-leaning actors take on roles of those from the opposite party. Baldwin is one recent example — he and Kate McKinnon prevailed at the Emmys for skewering the 2016 election between Trump and Hillary Clinton.

Julianne Moore‘s sweeping victory as Sarah Palin in “Game Change” (2012) is yet another. Moore won trophies at the Emmys, Golden Globes, Screen Actors Guild and Critics’ Choice Awards for her subdued portrayal of the Alaskan Governor-turned-John McCain‘s Vice Presidential running mate in HBO’s telefilm. Ironically, Tina Fey also took home an Emmy for playing a more over-the-top and buffoonish version of Palin on “SNL” in 2009.

The impetus for this fad of Emmy voters going gaga for conservative characters was Carroll O’Connor, who won four times for playing Archie Bunker on “All in the Family.” Archie’s right-wing curmudgeonly influence was later seen in Emmy-winning TV characters like Denny Crane (William Shatner) on “Boston Legal” and Jack Donaghy (Baldwin) on “30 Rock.”

Earlier in 2020 Cate Blanchett received an Emmy nomination for playing conservative icon Phyllis Schlafly in “Mrs. America”; she lost to Regina King (“Watchmen”). Conversely, Russell Crowe as Fox News mastermind Roger Ailes was snubbed for “The Loudest Voice,” so perhaps there is a limit to how many of these kinds of right-wing roles Emmy voters will choose to recognize each year.