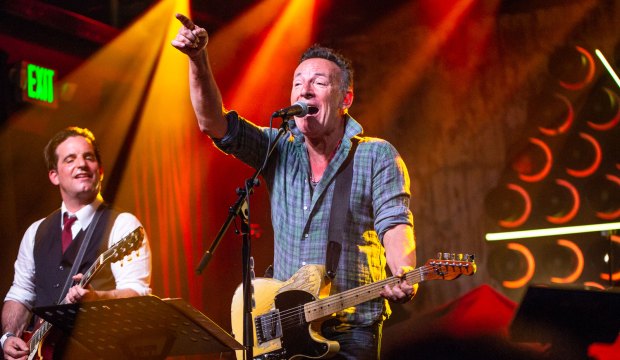 Bruce Springsteen released his 20th studio album, “Letter to You,” on October 23. It’s his first time recording with the E Street Band since “High Hopes” in 2014. So what do critics think of the beloved rock musician’s latest set?

As of this writing the album has a MetaCritic score of 89 based on 16 reviews counted thus far, 15 of them positive, one of them somewhat mixed and none outright negative. Springsteen is no stranger to critical adulation, but that score currently makes “Letter to You” the Boss’s highest-rated album of new material since MetaCritic has been keeping track.

Reviewers are saying the collection “delivers something very close” to “the electricity of live music,” with Springsteen and his band recording the songs together live in the studio. It’s “one of the warmest and most reassuring records of his career,” a “surprisingly personal statement” that feels “authentic.” The musician’s voice has a “weathered warmth” as he contemplates “nostalgia and death” with “a tone pitched between deep reverence and loss.”

SEEEverything to know about Grammys 2021 (so far)

Over the course of his career, Springsteen has won a whopping 20 Grammys out of 50 nominations. But he hasn’t been nominated for his music since 2013 when he contended for his album “Wrecking Ball” (more recently he had a Best Spoken Word Album nomination in 2018). The last time he took home a gramophone was a decade ago when he claimed Best Solo Rock Vocal Performance in 2010 for “Working on a Dream.” He surprisingly didn’t earn a single nomination for his acclaimed 2019 album “Western Stars.”

There doesn’t seem to be any less love for Springsteen in the industry, but perhaps the recording academy has sidelined him in recent years to leave room for artists who haven’t won 20 Grammys yet. Still, it might be hard for them to resist an album this well received, performed live in studio by the whole band. But he’ll have to wait awhile since a new eligibility period started on September 1, so “Letter to You” won’t be eligible until the 2022 awards. Do you think listeners and voters will celebrate this “Letter” to them from Springsteen and company?

SEE2021 Grammy nominations date finally announced: When will we know the contenders for music’s biggest prize?

Helen Brown (The Independent): “You can wrap yourself in the weathered warmth of his voice like an old leather jacket. It’s scuffed, tough and soft: equal parts blue-collar Jersey boy and stadium-filling rock star … Springsteen intended to tour right after this album was released. The plug has obviously been pulled on those plans now. But for those missing the electricity of live music, the seasoned connectivity ‘Letter to You’ delivers something very close.”

John Paul Bullock (Spin): “Nostalgia and death have always been central themes in Springsteen’s work but this particular moment carried a new kind of loss. For the first time, Springsteen found himself to be the lone survivor. This feeling is crystallized as ‘Letter to You’ … Surrounded by family and friends, Springsteen has made one of the warmest and most reassuring records of his career.”

Kory Grow (Rolling Stone): “The sentimentality that pulses through ‘Letter to You’ feels more authentic and personal than the fictional stories he dreamt up in his early work or even his recent dives into nostalgia … When Springsteen sings about glory days, this time, they’re his own glory days … ‘Letter to You’ is, for the most part, a surprisingly personal statement, since it’s unusual to hear one of rock’s most self-actualized voices take stock of what matters to him.”

Sam Sodomsky (Pitchfork): “Springsteen turned 71 last month, and his 20th studio album, ‘Letter to You,’ indulges in his past like never before. Following the autobiographical thread of his memoir and Broadway show, it seems to feature Springsteen himself as the narrator, observing the ways that music can sustain us, with a tone pitched between deep reverence and loss. That simple but elusive power forms the thematic heart of the record.”