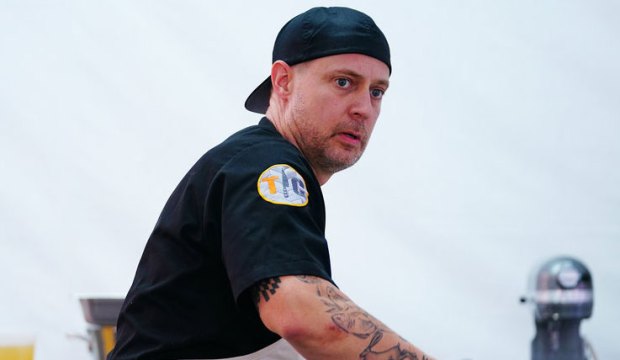 Kevin Gillespie led his team to ruin during “Restaurant Wars” last week on “Top Chef.” Despite having won three elimination challenges and three quickfire challenges before that, he had to pack his knives and go. Hew still has a chance to return to the main competition if he can survive the remaining weeks of “Last Chance Kitchen,” but with him on the outs for now, his “Restaurant Wars” teammate Bryan Voltaggio is enjoying a boost in our winner odds, which are based on the combined predictions of “Top Chef” fans who place their bets every week here in our predictions center.

Actually, our top two cheftestants were both on the losing team with Gillespie. Melissa King holds on to the top spot with leading odds of 10/3 as of this writing. Clearly fans aren’t holding the team’s loss against her. And they’re not holding it against Voltaggio either: last week we ranked him third with 8/1 odds, and now he has moved up to second place with 19/5 odds. Even though he was on the losing team, he had the right instincts during “Restaurant Wars.”

SEE‘Top Chef: Last Chance Kitchen’: Kevin fights to redeem his Restaurant Wars flop with another tribute to his family [WATCH]

During his confessionals Voltaggio expressed misgivings about Gillespie’s leadership, especially when it came to the overwhelming volume of dishes he planned — a dozen of them. Overextending themselves on the number of menu items was part of their downfall, though Voltaggio wasn’t very vocal about his concerns to Gillespie, perhaps not wanting to create even more chaos on the team by challenging the executive chef.

The executive chef who did win “Restaurant Wars,” Gregory Gourdet, is a close third in our predictions with 9/2 odds. It has been a great season for him overall: now he has won four elimination challenges, more than any other chef. And he’s the only chef in the entire competition who still hasn’t landed at the bottom yet in the main challenges. But then, that was also true of Gillespie before “Restaurant Wars:” that was his first time at the bottom, and just like that he was gone. So you can never be too sure who will rise to the occasion and who will stumble. But it also means that “All-Stars L.A.” is still anyone’s game.