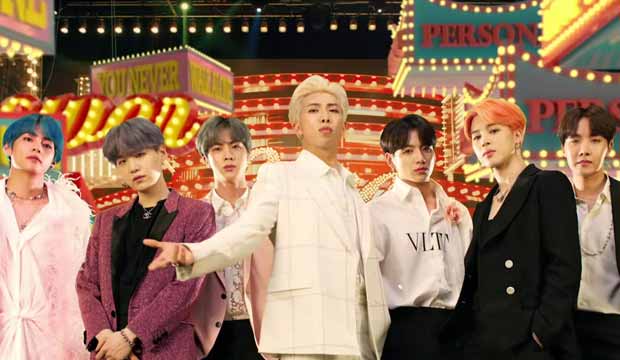 The K-pop band BTS continue their bid for world domination with “Map of the Soul: 7,” which was released on February 21. It expands on their 2019 EP “Map of the Soul: Persona,” five of whose songs also turn up on this epic, 75-minute full album. It’s already a global hit, but what do critics think?

As of this writing the album has a MetaCritic score of 82 based on 10 reviews counted thus far, all of which are positive. That’s eight points better than “Persona” and their previous studio album “Love Yourself: Tear” (2018), both of which averaged 74. And certainly the group’s passionate fans have spoken, giving the album a whopping user rating of 9.8 out of 10.

BTS are pretty much critic-proof, but critics are on-board anyway, calling them “compelling” as they “push forward conversations about genre, language.” “7” is “smashing,” “ambitious,” “cinematic,” “immersive,” “part memoir, part fan service.” And it allows them to show off their “mastery of different pop styles.” There is a hint of ambivalence, though: are BTS artists in their own right, or does this savvily marketed album amount to “brand activation, the latest petition for everyone to like and subscribe”?

It’s been a pretty good year for Korean cultural influence around the globe. BTS has been making hits for years now, but this album release follows the historic Oscar victory of South Korea’s “Parasite,” which won Best Picture, Best Director (Bong Joon Ho) and Best International Feature Film. Could BTS have a similar breakthrough at the Grammys in 2021?

They have yet to be nominated by the recording academy, but the combination of critical acclaim and commercial success for “7” might appeal to voters. And given the organization’s recent controversies around representation and voting, they might like the optics of opening their doors to the international phenoms. Check out some of the reviews below, and let us know what you think about this and more.

Hannah Zwick (Consequence of Sound): “BTS are both the world’s biggest and most interesting act in pop music right now: ‘7’ solidifies this position and smartly looks towards the future. Their cultural impact is undeniable, and their work continues to push forward conversations about genre, language, and much more. There’s no telling what BTS will do next, but that’s what’s so compelling.”

Rob Sheffield (Rolling Stone): “‘Map of the Soul: 7’ is their most smashing album yet, showing off their mastery of different pop styles from rap bangers to slow-dance ballads to post-Swedish electro-disco to prog-style philosophizing. The seven members have been together seven years, and it’s inspired them to sum up where they’ve been even as they look ahead to their future.”

Roisin O’Connor (The Independent): “‘Map of the Soul: 7’ is the band’s most ambitious attempt to date to reconcile their staggering range of influences, from US pop and hip hop to Eighties rock … as a full album, ‘7’ shows how determined they are to make this record as cinematic and immersive an experience as possible … When it comes to music, ‘7’ is is cast-iron proof we all speak the same language.”

Sheldon Pearce (Pitchfork): “The K-pop group’s latest is part memoir, part fan service, and part amateur psych eval. They can still tap into something enchanting, but the glimpses of personality here are fleeting … If the most personal is indeed the most creative, then ‘7’ could have benefitted from a bit more personality … Much has been made of BTS’ autonomy as creators, but their album feels like a brand activation, the latest petition for everyone to like and subscribe.”