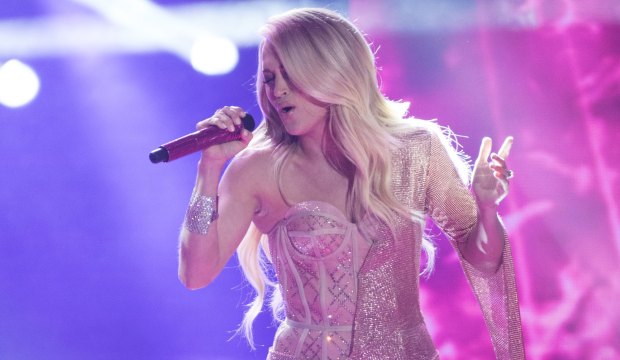 Will Carrie Underwood win Entertainer of the Year at the Academy of Country Music Awards? She’s already a two-time champ and would set a new record if she prevails again. And she happens to be the front-runner, according to the combined predictions of Gold Derby users. But she’ll need to watch out for first-time nominee Luke Combs.

Underwood previously took home the top ACM Award in 2009 and 2010. Those were followed by consecutive wins for Taylor Swift (2011-2012), making them the only women with multiple wins in that category. So if Underwood wins again she will stand alone as the only woman with three Entertainer of the Year trophies. But Underwood and Swift won during the years when fans voted for that category. In 2016 the academy went back to deciding the winner themselves, and it has been all men ever since.

Women have long been underrepresented and disadvantaged in country music, especially when it comes to radio airplay. The 2019 CMA Awards tried to shine a light on women in the industry; they were hosted by Underwood along with legends Reba McEntire and Dolly Parton. But then the CMAs passed over Underwood and gave Entertainer of the Year to Garth Brooks for the seventh time even though he only had one other nomination.

SEEWho is performing at the ACM Awards 2020? List of performers at 55th Academy of Country Music Awards

So what’ll happen at the ACMs? As of this writing Underwood gets leading odds of 16/5 of taking home a historic third prize. It doesn’t hurt that last year’s winner Keith Urban is absent from the category this year (though he will be hosting the telecast). So is Jason Aldean, who won three years in a row before that.

But a few of our Top 24 Users, who got the highest scores predicting last year’s ACM Awards, think Combs will upset. That’s certainly possible given the big year Combshas had with his album “What You See is What You Get.” And we mustn’t count out another two-time winner, Luke Bryan. So does Underwood have this in the bag, or will there be a shocker like at the CMAs?

Who is performing at the ACM Awards 2020? List of performers at 55th Academy of Country Music Awards