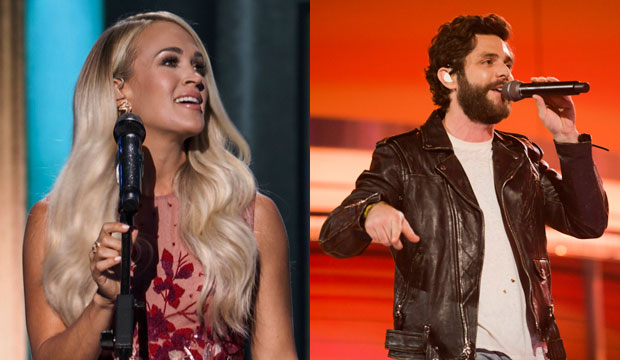 It was an unprecedented night at the 55th Annual Academy of Country Music Awards with the COVID-19 pandemic forcing a scaled-down, socially distanced production, so it was only fitting that it also had an unprecedented ending. Entertainer of the Year was awarded to two artists in the first tie in that category’s history: Thomas Rhett and Carrie Underwood. Check out the complete list of ACM winners here.

This was the first Entertainer of the Year win for Rhett, who also won Video of the Year for “Remember You Young” and previously claimed Male Artist of the Year in 2017 and 2019 — though ironically he lost the Male Artist prize this year to Luke Combs.

Underwood won this award for the third time in her career. She previously prevailed in 2009 and 2010, but that was when the category was decided by music fans. This was the first time she was awarded by the academy itself. But it was historic for Underwood for another reason besides the tie. With three Entertainer of the Year trophies, Underwood is now the category’s most honored woman, breaking her tie with two-time winner Taylor Swift.

SEEACM Awards Entertainer of Year winners list: Every winner at the Academy of Country Music Awards

The academy spread the wealth in other races. Combs won Album of the Year for “What You See is What You Get” in addition to his Male Artist prize. Old Dominion also won two categories: Group of the Year and Song of the Year for “One Man Band.” Tenille Townes and Maren Morris won twice as well: Townes took New Female Artist and Morris won Female Artist, and both of them shared Music Event of the Year as featured performers on Miranda Lambert‘s “Fooled Around and Fell in Love.”

What did you think of this year’s ceremony and the artists who won?