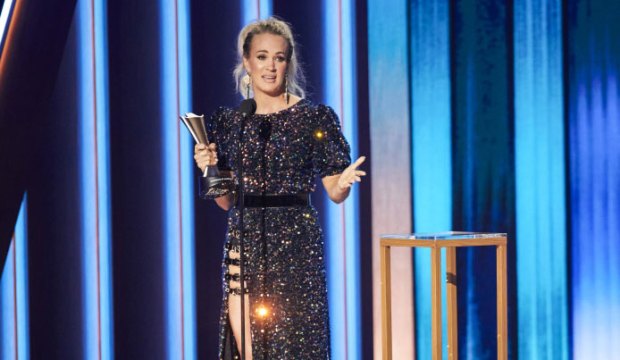 Carrie Underwood just won the Academy of Country Music Award for Entertainer of the Year for the third time in an unprecedented tie with Thomas Rhett. Could she repeat that success at the Country Music Association Awards coming up in November? She was surprisingly skunked last year when we thought she would win. Now we think they’ll make it up to her, and maybe she won’t have to share it this time.

Women have been historically underrepresented at the CMAs, to the extent that Underwood has now only been nominated for Entertainer of the Year three times despite being one of country music’s biggest stars of the last 15 years, not to mention the fact that she hosted the awards ceremony every year for more than a decade. In 2019 the event highlighted the contributions of women in country music with Reba McEntire and Dolly Parton joining Underwood as special co-hosts. But at the end of the night Garth Brooks was given the Entertainer trophy for the seventh time.

That win prompted Brooks to take himself out of consideration for that award going forward, but Underwood is back, and the early forecasts of our users say she’ll get her revenge. She gets leading odds of 11/2 over Luke Combs in second place with 6/1 odds and Miranda Lambert positioned third with 7/1 odds. If either Underwood or Lambert wins, it would be the first victory for a woman in the category since Taylor Swift in 2011. So will Underwood finally get her just desserts, or will the Country Music Association leave her hanging yet again?