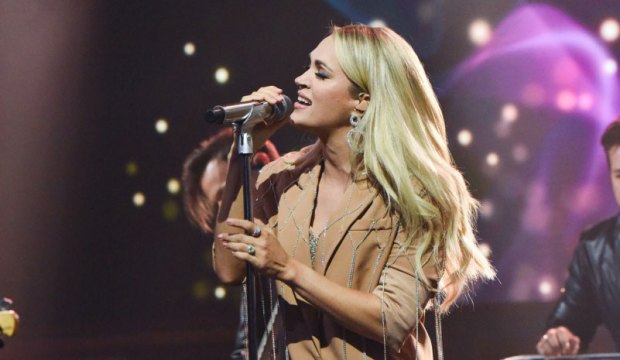 Carrie Underwood was the big winner at the 2020 CMT Music Awards with her two victories. And with those trophies she extended a few of her records. Her Video of the Year win for “Drinking Alone” was her eighth in that category, more than any other artist. She also won Female Video of the Year for that song, and that was her eighth victory in that race too — also a record. And with 22 wins in her career, she’s the most awarded artist of all time at the CMT Awards. Check out the complete list of winners here.

Despite Underwood’s past dominance at these awards we had given Luke Combs the slight edge to win Video of the Year for “Beer Never Broke My Heart.” Alas, Combs was shut out of his three nominations as he was also upset for Male Video of the Year, which went to Luke Bryan for “One Margarita.” And Combs’s third possible award, CMT Performance of the Year, went to Chris Young for singing “Drowning” at “CMT Artists of the Year.”

Rounding out the telecast winners were Gabby Barrett (Breakthrough Video of the Year for “I Hope”) and Old Dominion (Group Video of the Year for “One Man Band”). One last award, Quarantine Video of the Year, only announced its nominees two days before the ceremony. Winners were decided by Instagram users, who picked Granger Smith for “Don’t Cough on Me!” That was as good a sentiment as any to cap these socially distanced kudos. What did you think of the event?