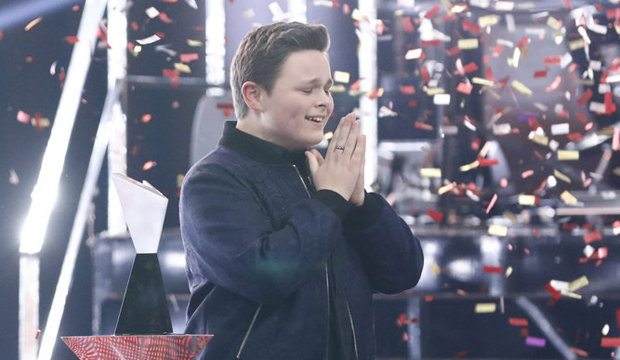 On “The Voice” season 19 finale on Tuesday, Carter Rubin pulled off a win, He gave coach Gwen Stefani her first victory after five seasons as a coach. But in our overnight poll, Rubin did not merit a majority of votes from “The Voice” fans when asked who should have won season 19.

Rubin had the support of only 43% of those weighing in wanted to win, which means 57% of “The Voice” viewers think he did not deserve the win. Of the other artists in the Top 5, Blake Shelton‘s two contenders — runner-up Jim Ranger and third-place finisher Ian Flanigan — did the best, polling 14% and 22% respectively. Kelly Clarkson‘s lone artist, DeSz, came in at 11% while John Legend‘s last act standing, John Holiday, had 10% support.

What do you say? Did Carter Rubin deserve to win “The Voice”? Or do you think one of the others in the Top 5 was robbed of the season 19 championship? One of these also-rans could end up the big winner. Their talents were showcased in the two-night finale as each got the chance to sing three songs.

If you haven’t cast your ballot yet, be sure to do so in the poll at the bottom of this post after reviewing the roster of songs performed by each of the Top 5 during season 19 of “The Voice.” And be sure to give us your thoughts on this edition of “The Voice” as well as your opinions of the four coaches.

SEE Where are the first 18 ‘The Voice’ winners now: Find out what happened to your favorites