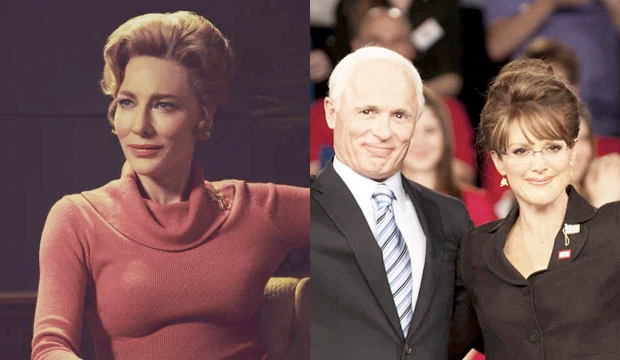 FX on Hulu’s limited series “Mrs. America” tells the story of conservative movement leader Phyllis Schlafly, played by Cate Blanchett, and her quest to halt the ratification of the Equal Rights Amendment. It’s no secret that Hollywood is filled with those of Democratic mindsets — or “libbers” as Schlafly affectionately called them — which begs the question: will the Emmys push back against this program about an influential Republican? One just has to look at Julianne Moore‘s sweeping victory as Sarah Palin in “Game Change” (2012) to find the answer.

Moore won trophies at the Emmys, Golden Globes, Screen Actors Guild and Critics’ Choice Awards for her subdued portrayal of the Alaskan Governor-turned-John McCain‘s Vice Presidential running mate in HBO’s telefilm. Apparently Hollywood wasn’t offended by seeing the controversial figure front and center in a true-to-life story told from her own perspective. Ironically, Tina Fey also took home an Emmy for playing a more over-the-top and buffoonish version of Palin on NBC’s “Saturday Night Live” in 2009.

The fact that Blanchett is a two-time Oscar winner (“Blue Jasmine,” “The Aviator”) definitely gives her some extra credit points when it comes to competing in Best Limited Series/Movie Actress. After all, this Emmy race has gone to Academy Award recipients time and time again. Kate Winslet (“Mildred Pierce”), Jessica Lange (“American Horror Story: Coven”), Frances McDormand (“Olive Kitteridge”) and Nicole Kidman (“Big Little Lies”) are just a few of examples from the past decade.

“Television Academy voters are notorious for bowing automatically to the ridiculous old bias in favor of the Silver Screen over their own ‘Boob Tube’ industry,” writes Gold Derby founder Tom O’Neil. However, Blanchett isn’t a lock as she faces tough competition from another awards darling: “The Watchmen” star Regina King, a three-time Emmy champ who recently took home her first Oscar for “If Beale Street Could Talk” (2018). We already know Emmy voters love King, but the jury’s still out on how they feel about Blanchett since she’s never been in serious contention for TV work.

If Blanchett ends up prevailing in the lead category, she’d be the fourth such champion from an FX limited series after Lange (“AHS”), Sarah Paulson (“The People v. O.J. Simpson”) and Michelle Williams (“Fosse/Verdon”). In her favor is the fact that “Mrs. America” is a critics’ darling, with many pundits pointing out the immense talent of the ensemble cast. Potential 2020 Emmy nominees in the supporting categories include Paulson, Rose Byrne, Margo Martindale, Uzo Aduba, Elizabeth Banks, Tracey Ullman and John Slattery.

Gold Derby senior editor Daniel Montgomery notes how Blanchett’s portrayal of Schlafly won’t be the only “right-wing demagogue” for Emmy voters to consider this year. There’s also Fox News mastermind Roger Ailes (Russell Crowe) in “The Loudest Voice,” a follower (John Turturro) of xenophobic Charles Lindbergh in “The Plot Against America” and dangerous populist Vivienne Rook (Emma Thompson) in “Years and Years.” Paulson is also an Emmy contender for portraying composite character Alice Macray, an initial supporter of Schlafly’s who later has doubts in “Mrs. America.”