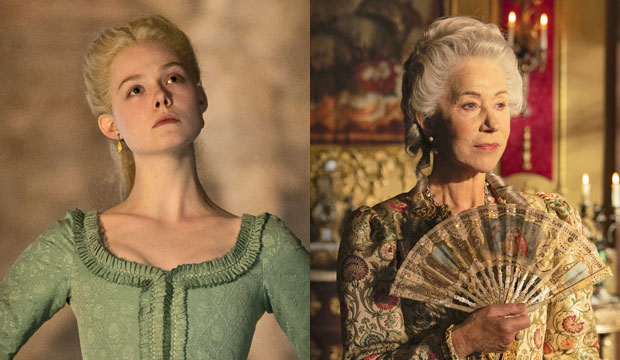 Hulu’s comedy series “The Great” premiered on May 15 with its true(ish) story of the rise of Catherine the Great in Russia. It’s actually the second program this season chronicling the life and rule of the empress, following HBO’s limited series “Catherine the Great” last fall. That means there could be two actors nominated for Emmys for playing the same role.

Elle Fanning plays Catherine in “The Great” as a wide-eyed young woman who quickly becomes disillusioned after she marries the cruel, boorish Peter III (Nicholas Hoult). The 22-year-old Fanning hasn’t been nominated for an Emmy in her career yet, but the show was created by Tony McNamara, who earned an Oscar nomination for co-writing “The Favourite,” which won Best Actress for its leading lady Olivia Colman as Queen Anne. So he may have the golden touch with this royal too.

An older Catherine was played by Helen Mirren in “Catherine the Great.” She already has a long and storied awards history including an Tony, an Oscar and four Emmys for Best Movie/Limited Actress: two for her role in the detective series “Prime Suspect” (1996, 2007), one for playing the title character in “The Passion of Ayn Rand” (1999) and one for playing another royal, Queen Elizabeth I in “Elizabeth I” (2006). And Mirren was nominated for a Golden Globe for “Catherine” a few months ago. Heavy is the head that wears the crown, but apparently not for Mirren. And currently Emmy Expert Eric Deggans (NPR) says Mirren will be nominated yet again this year.

Playing world leaders often pays off at the Emmys, with recent winners including Paul Giamatti as the title US president in “John Adams” (2008), Claire Foy as Queen Elizabeth II in “The Crown” (2018) and two actors who have played British Prime Minister Winston Churchill: Brendan Gleeson in “Into the Storm” (2009) and John Lithgow in “The Crown” (2017).

Double bids for Catherine the Great would also be reminiscent of the Oscars 21 years when two performers were nominated for playing the aforementioned Elizabeth I in 1998: Cate Blanchett for Best Actress in “Elizabeth” and Judi Dench for Best Supporting Actress in “Shakespeare in Love” — Dench won her category. Commanding the screen in such a grandiose, authoritative role and fighting through political intrigues is often catnip for actors, so it’s no wonder that such roles are often celebrated by awards voters. So how great do you think Catherine will be when voters mark their ballots this summer?