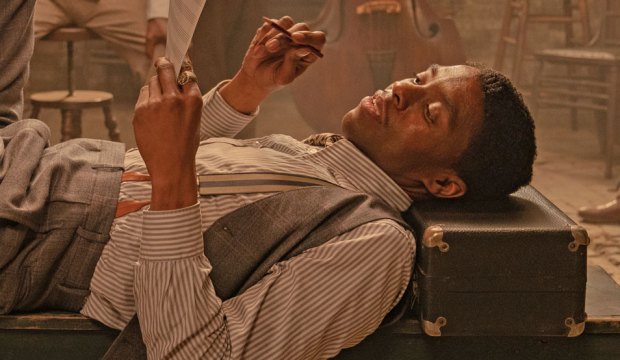 Oscar watchers weren’t sure for a while whether Chadwick Boseman would be campaigned as a lead or supporting actor for the Netflix film adaptation of August Wilson‘s play “Ma Rainey’s Black Bottom.” But it was recently confirmed that he’ll be pushed for Best Actor consideration. Since then he has risen into the top five in our odds for the lead-acting prize. Can he rise all the way to number-one?

On October 20, the day before his lead campaign was confirmed, Boseman ranked eighth in our Best Actor forecasts with 25/1 odds based on the combined predictions of thousands of Gold Derby users. As of this writing, he has climbed all the way to fourth place with 7/1 odds. The film doesn’t open until December 18, and the Oscar eligibility period was extended to February 28, 2021 due to the COVID-19 pandemic, so there’s plenty of time for Boseman to continue to climb.

SEE‘Black Panther’ star Chadwick Boseman gone too soon: 9 times he proved he was a winner

Boseman plays ambitious trumpeter Levee, a role that earned Charles S. Dutton a Tony nomination on Broadway in 1985. And there is greater sentiment leading into the film since Boseman died in August at age 43 from previously undisclosed colon cancer that he had been battling for years. He would follow in footsteps of posthumous Best Actor nominees James Dean (“East of Eden” and “Giant”), Peter Finch (“Network”), Spencer Tracy (“Guess Who’s Coming to Dinner”) and Massimo Troisi (“Il Postino”). Finch was the only one to win.

Boseman could receive a second nomination since he also plays a supporting role in Spike Lee‘s “Da 5 Bloods,” and his performance in that film resonates even more strongly in hindsight since he plays a fallen soldier in Vietnam whose men return years later to retrieve his remains. His screentime is relatively brief, but his character resonates throughout the film, and knowing that Boseman was fighting for his own life while playing a soldier who lost his makes it even more powerful.

He currently ranks 10th in our predictions in that category with 37/1 odds, but that too is up from where he was on October 20 (14th place with 89/1 odds), when many prognosticators thought he’d “Ma Rainey” would be his supporting push. No one has ever received two posthumous acting noms in the same year. The last living male actor to do so was Jamie Foxx, a supporting nominee for 2004’s “Collateral” and a lead winner for “Ray.” In fact, out of the 12 actors who have doubled up in one year, seven of them won one of their categories, which is a 58% success rate.

Do you think the motion picture academy will nominate Boseman twice? Might he even win twice?