Basketball player Charles Oakley and “Tiger King” animal activist Carole Baskin had the lowest scores on “Dancing with the Stars” when you combined the first two weeks’ performances, and viewer votes didn’t save them because they ended up as the bottom two on “First Elimination” night. But just like last season, it was up to the judges to decide which of them should stay and which of them should go. In a split decision, they kept Baskin in the competition and sent the NBA star packing. Was that the right call? We asked our readers, so scroll down to see the complete poll results.

Only 40% of respondents thought Oakley deserved to be sent home after his two performances, a salsa in the season premiere and then a cha cha in week two. For the salsa, he scored 4s from judges Carrie Ann Inaba, Derek Hough and Bruno Tonioli, for a total of 12 out of 30. That was one point better than Baskin, but even though he improved the next week with 5s for his cha cha, this time it was Baskin’s performance that ended up one point better.

So Inaba chose to save Baskin at the end of the night, while Tonioli picked Oakley. That left it to Hough to cast the deciding vote, and he chose to keep Baskin in the competition. But 57% of our readers thought it should’ve been Baskin sent out of the competition, while the last 3% thought someone else should have been eliminated who wasn’t in the bottom two. Do you agree with our consensus that the judges got off on the wrong foot with their first save of the season? 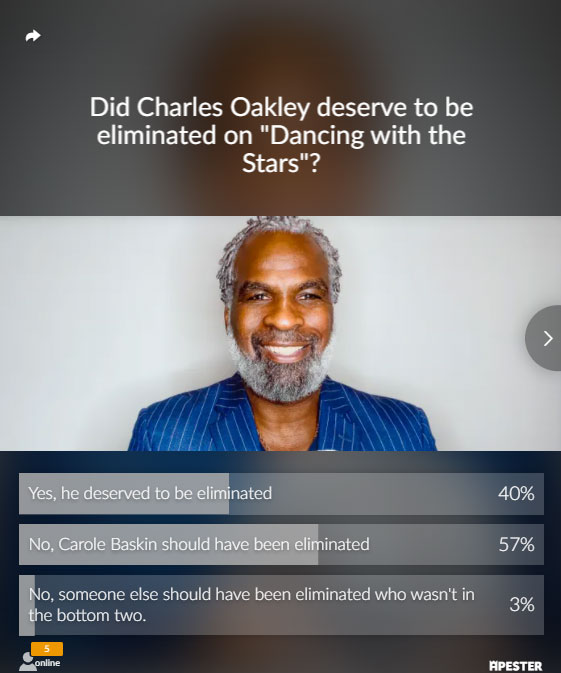