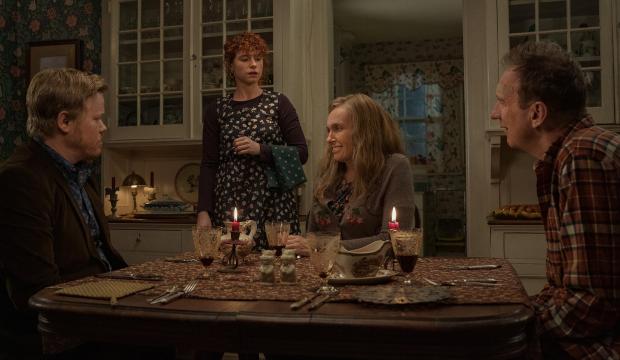 It’s been 12 years since Charlie Kaufman made his  live-action directorial debut with “Synecdoche, New York” in 2008. But the gifted and quite unique four-time Oscar nominee who won for his original screenplay for 2004’s “Eternal Sunshine of the Spotless Mind” is back behind the camera and is determined to frighten us with “I’m Thinking of Ending Things” that hits Netflix on September 4.

Instead of going big screen, the brain behind 1999’s “Being John Malkovich,” 20o2’s “Adaptation” and the 2015 stop-motion animated “Anomalisa” is going the streaming route with Netflix. His latest is based Iain Reid‘s best-seller of the same name and has knock-out cast. The Young Woman (Jessie Buckley) and Jake (Jesse Plemons) are a couple who take a road trip to meet his parents, even though she is planning to break up with him. Jake’s folks Dean and Suzie are played by David Thewlis and Toni Collette, who has horror cred galore after 2018’s  nightmare-inducing “Hereditary.”

But a blizzard leaves them stranded and soon weird things start happening. As shown in the trailer above, the parents utter odd things, the dog keeps shaking and when Buckley’s character and Jake go to a diner in the storm, a waitress says to her, “You don’t have to go.” A confused girl replies, “I don’t have to go where?” The server replies, “Forward.” Soon she experiences time in a chopped-up random way. Netflix calls this trip through a disturbing non-linear existence as “an exploration of regret, longing and the fragility of the human spirit.” They didn’t need to add, however, that it’s creepy as all get-out.