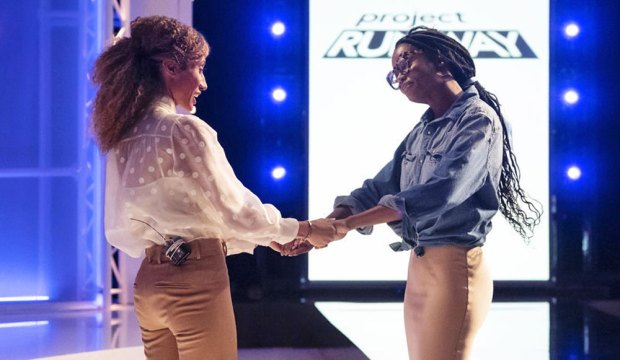 This time last week I wrote about how we were underestimating Chelsey Carter on “Project Runway.” She was the last designer who hadn’t received a single low score from the judges, so she seemed like a good bet for the finale, and maybe even to win the whole thing. Then she got her first low score in “Sheer Genius.” And was eliminated. Seriously? Our readers were as annoyed as I was. When we polled them about Carter’s ouster, the vast majority said they would have eliminated someone else instead. Scroll down for our complete poll results.

Only 15% of fans said Carter deserved to be eliminated. And to be fair, she did struggle during the challenge, during which she had only one day to create an editorial look using sheer fabrics. After a rough consultation with mentor Christian Siriano, she completely revised her design, but the blue trench coat she ended up with didn’t cut it. Still, for her to be eliminated on her one bad day, especially when another designer was ready to quit outright, didn’t seem fair to me or our readers.

That other designer was Victoria Cocieru, who got five high scores in a row from the judges, but then struggled in “Project Runway X Ashley Longshore” and again in “Sheer Genius.” At first she was confused by the very concept of sheer fabric. Then she got a tough critique from Siriano, who thought her design looked too much like the ones she had made before (he was right).

Like Carter, Cocieru had to go back to the drawing board, but unlike Carter, Cocieru was on the verge of quitting the show because she would rather have eliminated herself than look bad in front of the judges again. The other designers — including Carter — had to convince her just to stay on the show. She finally did decide to stay, but still squandered several hours during the one-day challenge.

However, Carter was the one the judges eliminated, and it was Cocieru who they let off with a warning. A whopping 81% of respondents thought Cocieru should have been the one sent home. Just 1% thought Geoffrey Mac should have been eliminated for his bottom-three look, while the last 3% said the designer who should’ve been sent home wasn’t even in the judges’ bottom three.

What did you think of this surprise outcome? Was Carter robbed? Should Siriano have used his Save to keep her in the competition? 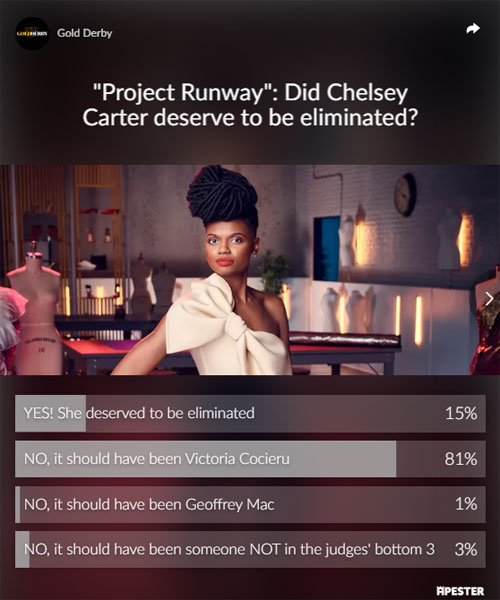