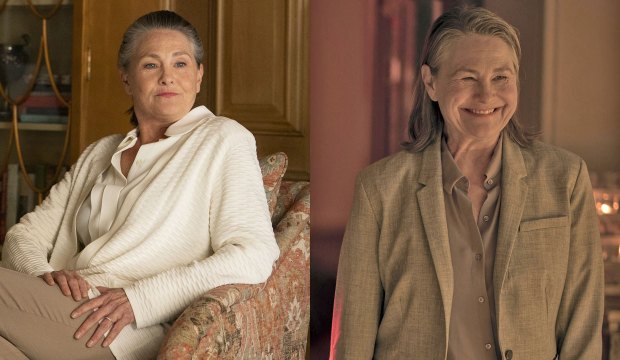 Cherry Jones is the defending Emmy champ for Best Drama Guest Actress for her role as Holly, the mother of Elisabeth Moss‘s crusading character June in “The Handmaid’s Tale.” But she could actually get two nominations in that category this year instead of just one. She’s also a contender for her appearances in the second season of “Succession.” It’s not uncommon for an actor to be an Emmy contender multiple times for different projects, but in this case we’re actually predicting her to be nominated for both.

The veteran actress appeared in the season three “Handmaid’s” episode “God Bless the Child” in which she shows up in flashbacks to the baptism of June’s daughter. We rank her sixth for that performance with 20/1 odds; eight of our Top 24 Users (who got the highest scores predicting last year’s nominations) say Jones will make the cut, as do three of our Editors who cover awards year-round for Gold Derby.

But even though that’s the role she has already won for, we think Jones has an even better chance of being nominated for “Succession,” for which she ranks fourth with 13/2 odds. She has more support for this role from our Top 24: 13 of them say she will be nominated, and two say she’ll win. Similarly, six of our Editors predict her to be nommed for this performance and two of them also think she’s the front-runner. She appeared in two episodes last season as Nan Pierce, the majority owner of a media conglomerate who considers selling the company to Logan Roy (Brian Cox).

So will she be nominated for one performance, both, or neither? She has a strong case for “Handmaid’s” since she has been nominated twice for that role and just won. We’ve seen in recent years how the television academy often latches onto an actor and keeps checking them off for the same role, as they did when Margo Martindale won multiple Emmys in this category for “The Americans” despite scant screentime.

On the other hand, “Succession” may be poised for a huge breakthrough in its second season. Though it earned a Best Drama Series nom in 2019 and won for its writing, the show didn’t make the cut in any acting categories. But the buzz and acclaim for season two of the HBO corporate drama were much greater than the first, leading to windfalls at the Golden Globes, Critics’ Choice Awards and Producers Guild Awards, among other plaudits. If the show does dramatically increase its Emmy nominations haul, an academy favorite like Jones could certainly go along for the ride.

There’s no doubt that voters admire Jones, who also won a surprise supporting Emmy in 2009 for playing the president on “24,” and she’ll also be on the Emmy ballot for her supporting role in the Apple TV+ limited series “Defending Jacob.” Actors with so many projects in contention often find themselves nominated for several of them. Consider Sandra Oh last year (“Killing Eve,” “Saturday Night Live” and the 2019 Golden Globes telecast) or Laurie Metcalf in 2016 (“Getting On,” “Horace and Pete” and “The Big Bang Theory”), just to name a couple. But multiple nominations in the same category would be a far rarer feat. Do you agree with our early odds that Jones will pull it off?