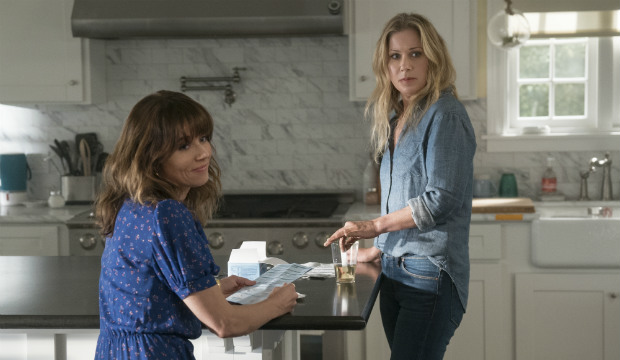 Last year, Christina Applegate racked up a surprising Best Comedy Actress nomination at the Emmy Awards for the freshman season of Netflix’s “Dead to Me.” As it now competes at the upcoming ceremony for its sophomore outing (for which Netflix has yet to announce a release date), Applegate could be nominated alongside her co-star Linda Cardellini, who didn’t make the cut last year. As of this writing, Applegate sits in third place in our combined Emmy odds, while Cardellini is in striking distance in eighth place.

In the first season, Applegate’s Jen and Cardellini’s Judy meet at a grief support group following their husband and fiancé’s passing; Jen’s husband was killed by a hit-and-run driver while Judy’s fiancé died of a heart attack. But there’s a twist: Judy’s fiancé Steve (James Marsden) is very much alive, but left her after she experienced her fifth miscarriage, which Jen quickly comes to learn. The season then follows these two women as they bond over their respective tragedies, although their ways of coping with them are rather opposed. Judy, however, carries the burden of one dark secret: She’s the hit-and-run driver who left Jen’s husband to die on the road.

Applegate thoroughly has all her chops on display, underscoring how Jen uses anger and indignation to channel her grief with layers of both comedy and drama, but without ever lessening the severity of Jen’s pain. Her Emmy nom last year came as an arguable surprise since “Dead to Me’s” first season came out toward the end of the eligibility cycle (May 3) and risked not having enough visibility before voting began, but her inclusion now only boosts her as well as the show’s overall chances this year. At this point, Applegate seems like a very safe bet to return, not only because she nabbed the Emmy bid last year (and practically put the show on the map in terms of awards), but also because she went on to bag noms at the Critics’ Choice, Golden Globe and Screen Actors Guild Awards. Plus, she’s already a five-time Emmy nominee and one-time winner for “Friends” in Best Comedy Guest Actress (2003).

As opposed to Jen, Judy tries to maintain a positive temperament, which Cardellini plays brilliantly, but some of her best scenes in the first season are when the pain of having had five miscarriages catch up with Judy and punch her right in the gut. The actress also makes you empathize with a woman who committed a hit-and-run, then tries to befriend the victim’s bereft spouse to cope with her guilt, which is a haywire act. Although the second season and thus Cardellini’s work are still unseen, she could capitalize on a rather wide-open field, since last year’s nominees Julia Louis-Dreyfus (“Veep”), Natasha Lyonne (“Russian Doll”) and reigning champ Phoebe Waller-Bridge (“Fleabag”) are not in the running this time around. And since Cardellini is a past Emmy nominee for “Mad Men” in Best Drama Guest Actress (2013), Emmy voters are already familiar with her.

SEENetflix schedule: Here’s what is coming and leaving in April 2020

Her snub last year could be attributed to the fact that “Dead to Me” did indeed release about just a month before Emmy voting for the nominations began, which may not have disadvantaged Applegate (the more known Emmy quantity), but Cardellini would have likely benefitted from a bigger gap between the show’s release and voting. Now she could be in a similar position like “Killing Eve’s” Jodie Comer, who wasn’t nominated in Best Drama Actress for the show’s first season (which had an April-to-May run) while her co-star Sandra Oh (then, a five-time Emmy nominee) was, but snagged the nom and even won for the second season after voters had had ample time to catch up with the show. And Comer isn’t, in fact, the only actor who had to wait her turn: For instance, Jane Fonda didn’t bag her inaugural Best Comedy Actress bid for “Grace and Frankie” until the show’s third season whereas her co-star Lily Tomlin had been recognized from the very inception.

With that said, Cardellini is probably more likely to follow in Comer’s footsteps than in Fonda’s since the former’s nom came alongside eight others bids for “Killing Eve” including Best Drama Series, while “Grace and Frankie” has yet to be shortlisted for Best Comedy Series. And “Dead to Me,” which is in fifth place in our odds for Best Comedy Series, is in a good position to see an uptick in nominations like “Killing Eve” did for its second season, given that the field has cleared now that many of last year’s contenders are ineligible.

Besides, it’s hard to deny Applegate and Cardellini’s chemistry onscreen, with both performances noticeably intertwining in the first season. If the show’s maiden outing is any indication – especially the finale, in which Jen poetically kills Steve – then we’ll see more of these two actresses playing off each other in the second, and Emmy voters might not want to reward the one without the other.