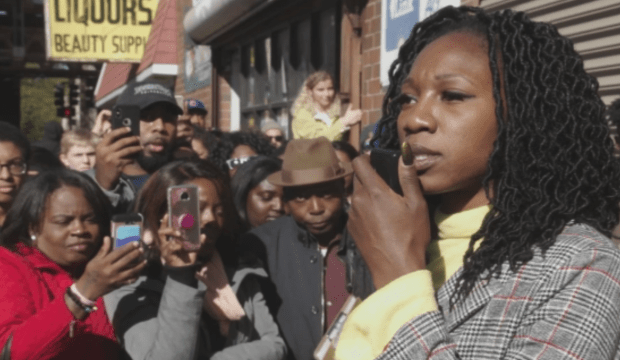 Chicago is the subject of “City So Real,” a sweeping epic five-part documentary series by Oscar nominee Steve James (“Hoop Dreams,” “Small Enough to Jail”). Chi-town is the third biggest city in the U.S. with its rich cultural diversity divided into 77 distinct neighborhoods including Bucktown, Pilsen, Lincoln Park, Goose Island, River West and South Loop. And its pizza is considered the best or one of the best in the country. But the Windy City has been marred by corruption for the years-its politics are often referred to as a “blood sport.” And the city has been gripped by so much gun violence that the it’s been labeled the “murder capital” of America.

The metropolis is at the crossroads when “City So Real” opens in the summer of 2018. Mayor Rahm Emanuel finds himself increasingly unpopular due his handling and perceived cover-up of the shocking killing of a young African American teenager, Laquan McDonald, in 2015 by a police officer. As the trial of the police officer is getting underway, Emanuel shocks the city by dropping out of the mayoral race. With his departure, some 21 candidates emerge.

No wonder politics is called a “blood sport” in the Windy City. Not only do the candidates have to get signatures from citizens on petitions to qualify as a candidate, they also must fend off fellow contenders who can challenge the validity of the signatures on the petitions.

Among the 14 who survive the petition process are: the wealthy African American Willie L. Wilson, who is currently running for U.S. Senate, shown donating money to the churches as he visits one Sunday on the campaign trail; Neal Sales-Griffin, a young entrepreneur, investor, teacher and non-profit leader; Dr. Amara Enya, a public policy expert and social impact professional who is endorsed by Chance the Rapper; Bill Daley, the youngest son of the late Mayor Richard J. Daley; and longtime politician Toni Preckwinkle, who lost in a run-off election to Lightfoot,  the first black and LGBTQ mayor of Chicago.

The Chicago Sun Times’ Richard Roeper observed that the series “feelings like a sprawling, epic Tom Wolfe nonfiction book caught on film, as it captures stories huge and small, showcases the astonishingly beauty and the heartbreaking blight of Chicago and introduces a number of memorable real-life ‘characters’ in multiple storylines set against the big-picture backdrops of 2019 mayoral election and the protests and calls for real change throughout the city.”

James told Point of View Magazine he long wanted to do a movie about his adopted home. “Going way back to my grad school days, a Chris Marker film ‘Le Jolie Mai, impacted me. My film isn’t that — Marker’s a poet, I’m just a filmmaker — but I did take some cues from what he did in ‘Le Joli Mai.’ It’s a film in which he made a portrait of Paris at a crucial moment coming out of the Algerian conflict. Marker talks to people-he has verité scenes mixed with interview scenes-and it’s an interesting smorgasbord. I thought, I’d love to do that, but at the right time for Chicago.”

And with the mayoral election and the murder trial of the police officer, Jason Van Dyke, James thought the time was right. “Chicago finds itself, like most of America, at a crossroads politically,” James noted. “Things are in a very weird place. Violence and [bad] police relationships in the Black community are not unique to Chicago.”

“City So Real” soars when James and his crew, which included his cameraman son Jackson James and longtime producer Zak Piper, who also is the sound recordist, visit the neighborhoods to talk to the people who live there.

The discordance between white and black Chicagoans are on viscerally on view in his visits to a black issue of race and violence when James stops by black and white owned barbershops. And there’s a beautiful moment when a proud black homeless woman sings a Christmas carol to a young woman having breakfast at a popular restaurant in a black community.

“City So Real” was only four episodes when it premiered this January to laudatory reviews at the Sundance Film Festival in January, concluding with Lightfoot winning in a landslide. But after Sundance, James returned to the streets to chronicle the effects of COVID on the communities as well as the protests that erupted over the death of George Floyd in May.

The black barbershop is out of business. Lightfoot finds herself criticized as being pro-police with her handling of the Floyd protests. As with most cities, Chicago has suffered during the Covid-19 pandemic. The city currently has $1.2 billion budget deficit. Lightfoot recently announced she’s considering a $94 million tax increase, a gas tax hike and layoffs of over 300 workers to help with the budget woes.

James said he loves Chicago but “I don’t feel like a naïve lover.” Still, he embraces the spirit of the Windy City. “I love the people,” he explained. “I’m also horrified in the violence and the despairing at the amount of segregation in this city and all of its problems. But there is a spirit here, and it is the birthplace to community activism in America. I think you see that in this film, and you see the kind of way in which people engage here.  You’ve gotta love that the city for that.”