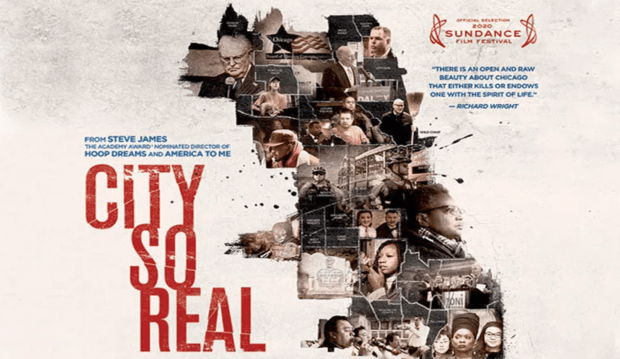 At the Sundance Film Festival, Oscar-nominated documentarian Steven James (“Hoop Dreams”) was widely praised for “City So Real,” his then-four-part documentary series about his adopted city of Chicago. The sweeping series covering 2018-2019 chronicles the heated over-crowded race for mayor. It also delves into the murder trial of a Chicago policeman accused of killing a black teenage boy and the flight of many black inhabitants to other cities and states.

“City So Real” received strong reviews from the critics. James and his longtime producing partner (and sound recordist) Zak Piper set out to sell the series. But their plans were upended by the pandemic and the murder of George Floyd in May. So James returned to “City So Real” to produce a fifth episode. NatGeo will be airing all five installments commercial free today starting at 7 p.m. ET and PT and the whole series can be seen on Hulu starting tomorrow.

James was on hand for a virtual premiere of the fifth episode and Q & A moderated by Sunny Hostin of “The View.” In his introduction to the screening, James explained, “The series takes a long at the soul of Chicago, a quintessential American city, in my view with an indomitable spirit. We decided we needed to create a whole fifth episode to show the challenges we all face now. The episode is pretty gritty. It’s emotional. I hope you find it moving.”

James, who grew up in Virginia, noted that Chicago is actually the only big city he’s lived in “in any real way. It’s just so complex and so full of passion and there’s just so many different sides to this city. There’s million stories to tell here and we’re trying to do that.’ The filmmaker admitted he thought he and Piper thought the series was over when Lori Lightfoot, the first black LGBTQ mayor of the city, won in a landslide.

“When the pandemic hit, we hadn’t sold the series yet because the pandemic had ground everything to a halt. We started to think, ‘Gosh, the city is going through this amazing thing. If our series is going to be s fully resonate as we wanted it to be, maybe we need to do a postscript on the pandemic.”’ It didn’t stay a postscript very long.

As James quipped: “things expand when I’m involved.” And the postscript turned into an extra installment after Floyd was murdered and Black Lives Matter protests dominated the streets of Chicago. “It just became clear to us that we have to do a full-on episode. That postscript is not nearly adequate enough to capture what the city is going through.” He also welcomed the chance to look at Lightfoot’s turbulent first year on the job “and how she was dealing with the pandemic, George Floyd and everything else that’s going on in the city. We liked the idea of that because we hope as you get to the end of the episode four, you’re curious as to how that goes.”