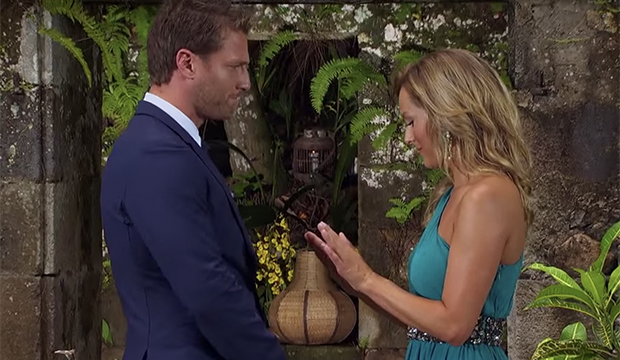 Despite how things ended between them on “The Bachelor” and their recent Twitter tiff, Juan Pablo Galavis insists he’s “happy” for Clare Crawley to lead “The Bachelorette” and wants her to find true love.

“I never had any bad blood with her,” the Season 18 star told “Life & Style. “She has been looking for love for some time and she totally deserves it. … She has been a part of the franchise shows for years, and now, she has the chance to pick who can potentially be the love of her life. Not an easy task, but a great opportunity for her.”

“She just has to follow her heart, do what she believes is best for her future, be real and not let the show pressure her into making the wrong decision,” he added.

Crawley, whose season has been postponed due to coronavirus, provided one of the most memorable moments in franchise history when she ruthlessly told off Galavis after he dumped her in the finale. This occurred after he allegedly made a crude remark to her during their final date, saying he “loved f—ing her” instead of saying he loved her. “I would never want my children having a father like you,” she said to a stone-faced Galavis. The former soccer player chose Nikki Ferrell, to whom he also never said “I love you,” and the pair split seven months later.

Galavis tells “Life & Style” that he never meant to hurt Crawley on “The Bachelor.” “I did what I had to do, which was pick who I felt was The One,” he said. “The experience taught me a lot, even after, to be honest, but my intention was never to hurt Clare or any other contestant. The show puts you in tough spots, so I can ultimately understand how she must have felt.”

Not shockingly, Crawley and Galavis have not kept in touch the past six years, during which she’s done “Bachelor in Paradise” (twice) and “The Bachelor Winter Games,” on which she met former fiancé Benoit Beauséjour-Savard. But Galavis and Crawley got into it on Twitter over the weekend after he mocked the young men in her cast, many of whom will likely be recast during the production shutdown.

“I just SAW the GUYS for @Clare_Crawley Bachelorette season and its gonna be INTERESTING seeing HER get hit on by KIDS on [sic] their 20s,” Galavis tweeted on Saturday. “I think this MIGHT be the 3rd SEASON Im gonna watch.”

Crawley, who turns 39 on Friday and is the oldest Bachelorette, fired back, “And yet here you are, older than 99% of them and still cant practice compassion and kindness.”

I just SAW the GUYS for @Clare_Crawley Bachelorette season and its gonna be INTERESTING seeing HER get hit on by KIDS on their 20s… I think this MIGHT be the 3rd SEASON Im gonna watch.

And yet here you are, older than 99% of them and still cant practice compassion and kindness…

With production postponed indefinitely, whenever “The Bachelorette” starts filming, Galavis hopes Crawley will see how difficult being the lead is. “Roles are reversed now and she will understand how hard it is to decide between the last three,” he said. “Who knows? She might see things from my perspective for once.”