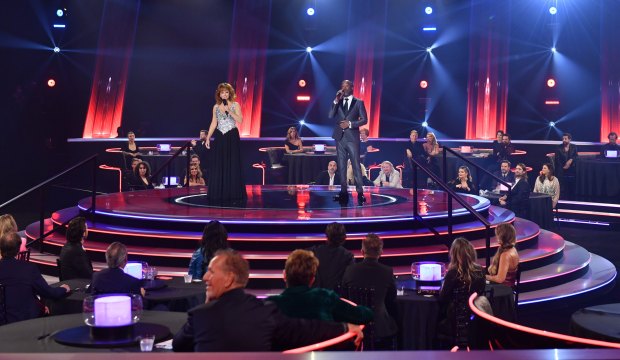 The CMA Awards aimed to be a triumphant affair as the first major live, in-person awards show since the COVID-19 pandemic struck the US in March. But must the show really go on? The ceremony took place with nominees, performers, presenters, and hosts Reba McEntire and Darius Rucker gathered together at the Music City Center in Nashville, Tennessee, but performers dropped left and right due to positive COVID diagnoses in the days leading up to the event. What did you think of how the show went forward? Vote in our poll at the bottom of this post.

Lots of award shows have adapted to the pandemic. The Daytime Emmys and Primetime Emmys were handed out remotely. The ACM Awards were held in separate venues with empty stands. The MTV Video Music Awards included outdoor and drive-in performances. And those shows didn’t have a slew of COVID cases leading up to their big nights.

In just the three days leading up to the CMAs, five artists dropped out due to the disease. Lee Brice and Florida Georgia Line member Tyler Hubbard announced on Monday, November 9, that they had been diagnosed. And on Wednesday, the day of the show, it was reported that nominees and scheduled performers Jenee Fleenor and Rascal Flatts had to cancel due to their diagnoses. No one in Lady A tested positive, but they had to back out too because an unidentified family member did — though Lady A member Charles Kelley still made an appearance during the show, filling in for Brice during a duet with Carly Pearce.

All that made it more conspicuous that, while the show had a much sparser crowd than usual (tables spaced apart, not packed in shoulder-to-shoulder), there were no masks in sight during the three-hour indoor event. The CDC acknowledged this fall that the virus is airborne, and cases in the US have been breaking records day after day, so watching the mask-less, marginally distanced event was a little like watching “Fear Factor.” We probably won’t know for a week or two if there will be any public health repercussions from this event (as was true for the White House’s recent Rose Garden massacre), but do you think the show should have stayed the way it was, gone virtual, or not gone forward at all? Vote below to let us know.