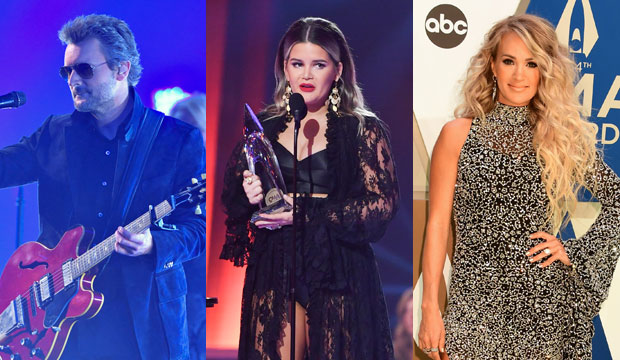 Almost a half dozen COVID-diagnosed performers couldn’t stop the 2020 Country Music Association Awards from airing on November 11, and they ended in a big surprise. A year after Garth Brooks was so taken aback by winning Entertainer of the Year that he ultimately pulled his name out of consideration, the CMAs once again threw a curveball in the top category. They awarded Eric Church over most-nominated artist Miranda Lambert, Album of the Year champ Luke Combs and ACM Entertainer winner Carrie Underwood. Did that surprise you as much as it surprised the Gold Derby users who predicted the event?

Church’s victory was the first of his career, but it was conspicuous because his only other nomination was Male Vocalist of the Year, which he lost to Combs. He didn’t have a new album in contention this season, or any songs that made the cut at these kudos either. When Brooks won last year he also didn’t have much other support: his only other nomination was for dueting on “Dive Bar” with Blake Shelton.

If you’re Lambert or Underwood, two of the most popular country artists of the last 15 years (Lambert is the most nominated woman in CMAs history, and Underwood hosted the ceremony for more than a decade), you might be wondering what it will take for the association to give a woman the top prize. Heck, this was the first time two women were even nominated in the category since 2010. And the only woman who has won in the last 20 years was Taylor Swift (2009, 2011).

SEEShould the CMA Awards have gone forward (mask-less!) with all the corona goin’ ’round? FIVE acts had to drop out [POLL]

Women didn’t have trouble winning elsewhere, though. Maren Morris took home the most hardware, winning three out of the four awards she was up for: Female Vocalist of the Year, and Single and Song of the Year for “The Bones.” And in awards presented before the broadcast, Lambert won Music Video of the Year for “Bluebird” and Carly Pearce shared Musical Event of the Year with Lee Brice for their duet “I Hope You’re Happy Now.”

Combs prevailed twice: Album for “What You See is What You Get” and Male Vocalist of the Year. Old Dominion and Dan and Shay repeated as Vocal Group and Vocal Duo of the Year, respectively. And rounding out the list of champs was New Artist of the Year Morgan Wallen, who luckily didn’t have to send Jack White to accept the award on his behalf. What did you think of the awards? And how long will we have to wait to see another female Entertainer of the Year?