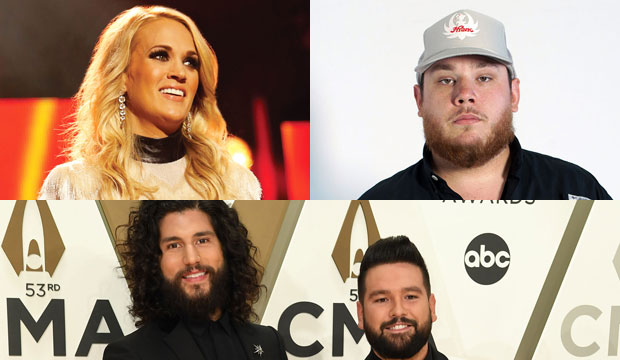 The 2020 CMA Awards are set to recognize country’s biggest and best stars of the past year. With the awards just around the corner on November 11, and many heated battles this year, let’s take a look at the artist categories of 2020, starting with the big one …

The race for Entertainer of the Year is an open game, but there’s a good chance we might see country superstar Carrie Underwood win after her ACM win in the same category earlier this fall. A win here would be Carrie’s first EOTY award after two previous losses, and she’d be the first woman to win since Taylor Swift almost a decade ago. This would also be the case with Miranda Lambert, although she didn’t get in at the ACMs.

That said, Luke Combs has undoubtedly been the top country artist of the past year given his consistent presence on the charts, so he might be honored with this important recognition. If we’re looking for a dark horse, it could be Eric Church, who was also nominated alongside Underwood and Combs at the ACMs and could perhaps upset; he’s been nominated three previous times, so it could be his year. And, while we’re not counting on it, Keith Urban is a consistent nominee here, so a win wouldn’t be shocking.

Female Vocalist of the Year

Both Lambert and Underwood have dominated this award, with seven and five wins, respectively. However, that could ultimately be a reason for voters choose to award new blood. All eyes are probably on Maren Morris, who had a huge hit this year with “The Bones,” which is up for Single and Song of the Year. Morris also just won this category at the ACMs, and the two award shows often coincide in this category, which could be the ultimate sign of a Morris win.

However, do keep an eye out for Ashely McBryde, who has been embraced by the country industry, earning a surprising win for New Artist last year against bigger hit-makers like Midland and Morgan Wallen, not to mention recently co-hosting the CMT Music Awards.

Male Vocalist of the Year

This award will most likely go to Luke Combs. He has the biggest album of the season (“What You See is What You Get,” still going strong on the charts a year after its release), and he also won this same award last year. Considering his competition, there could be an upset by Eric Church, who’s a seven-time nominee but hasn’t won yet, or maybe Thomas Rhett, who has been a consistent nominee for the past four years. However, it’s more than likely Combs will be repeating here.

Vocal Group of the Year

Similar to Male Vocalist, there’s a clear front-runner here: Old Dominion. Not only have they been consistent hit-makers in the country sphere, but their self-titled album is also nominated for Album of the Year, a strong sign of CMA support. Old Dominion’s win would be their third consecutive. Perhaps they could be dethroned by the veteran groups in the category (Lady A, Little Big Town, Rascal Flatts), all of whom won multiple times in past years. However, anyone else winning but Old Dominion would be quite surprising.

Vocal Duo of the Year

The clear favorites here are Dan and Shay. Not only have they had the biggest year (including a crossover pop hit in “10,000 Hours”), but they also won this last year at the CMAs and at this year at the ACMs against the same lineup (the two award shows don’t tend to have much deviation in this category).

That said, maybe we could see veterans Brooks and Dunn inspire enough passion to upset, or perhaps we can get a win for female duo Maddie and Tae. An all-female act hasn’t won this since The Judds in 1991, so wouldn’t it be awesome to add some more women to the very male patheon of winners? Think about it, Country Music Association.

This is the second nomination here for Morgan Wallen and Carly Pearce, which could be a good thing; past winners like Luke Combs, Zac Brown Band, and Brett Eldredge won on their second tries. Out of the two, Wallen has had the most commercial success (his debut album “If I Know Me” is still in the top 30 on the Billboard 200 more than two years after its release). But this category isn’t completely commercial-skewing, so a win from him isn’t a lock. Also nominated is Gabby Barrett, whose single “I Hope” has been a massive hit — a rare country song to reach the top 10 on the Billboard Hot 100 — which could be enough to win her this award.

Then there’s Jimmie Allen and Ingrid Andress, both of whom have had radio success, though not to the extent of their aforementioned rivals. So … who’s winning? This looks like an open race, and the ACMs can’t help us this time since both of their New Artist winners (Tenille Townes and Riley Green) weren’t even nominated here, but it’s probably between Wallen and Pierce.