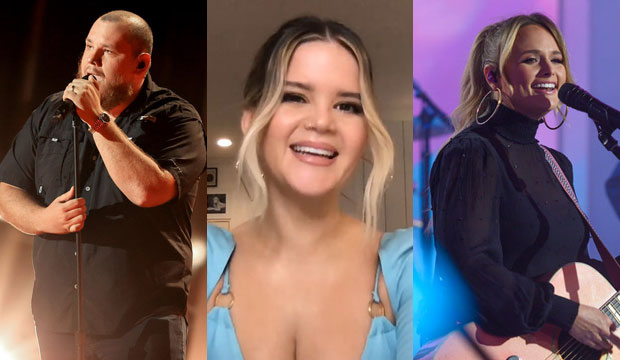 The 2020 CMA Awards are set to recognize country’s biggest and best music of the past year. The awards are right around the corner with many heated battles, so let’s take a look at 2020’s album and song categories. Some of them are easier to forecast than others.

Luke Combs is probably winning this for “What You See is What You Get.” He won this award at the ACMs earlier this fall, he’s had a big year (the album just returned to number-one on the Billboard 200 51 weeks after its release thanks to a deluxe reissue with additional songs). I further discussed his 2020 supremacy a couple of times here. The women in this category could upset (Miranda Lambert‘s “Wildcard” and Ashley McBryde‘s “Never Will” were critically acclaimed), but it’s probably Combs.

To be honest, any of these nominees could win. “10,000 Hours” by Dan and Shay with Justin Bieber, “The Bones” by Maren Morris and “I Hope” by Gabby Barrett were radio crossover hits, which could help them. Morris especially has been country’s beloved female artist for a few years now (she won last year’s CMA Award for Album of the Year for “Girl”), Dan and Shay have had another successful year of country hits, and Barrett could get some love as the breakout star in the lineup.

Then again, you should never count Luke Combs out (see above), especially since his nominated song, “Beer Never Broke My Heart,” was also a number-one hit on country radio. And there’s also Miranda Lambert, who had a radio hit with “Bluebird.” Popularity plus industry respect might push Morris to finally win this award, but don’t be surprised if anyone else upsets.

Important to remember about this category, which specifically honors songwriting, is that the Single of the Year winner doesn’t always repeat here. In fact, recently it usually doesn’t (in the last 10 years the categories have only matched three times). It’s also not usually won by an artist twice in a row. Combs won this prize last year for “Beautiful Crazy,” so his “Even Though I’m Leaving” might not win here despite how dominant he’s been in the industry this year, and “The Bones” could be disadvantaged here if it wins Single of the Year as voters might look to spread the wealth.

“Bluebird” by Lambert could actually benefit from this and end up winning the award. That said, “I Hope You’re Happy Now” by Lee Brice and Carly Pearce does feature Combs as a songwriter, and it would be a way to award Pearce as a co-writer as well. The race is more open than most years, but that said, despite their potential disadvantages, we might see a victory for either Morris or Combs.

Musical Event of the Year

This category’s past winners widely vary, so there isn’t really a consistent trend to follow. They usually don’t go with the biggest hit, but “Old Town Road” by Lil Nas X and Billy Ray Cyrus did manage a win here last year, so the mainstream domination of “10,000 Hours” could score Justin Bieber his first CMA Award.

Also look out for Miranda Lambert’s “Fooled Around and Fell In Love” and Thomas Rhett‘s “Be A Light,” since those songs have so many famous names attached as featured artists. “Fooled Around” just won at the ACM Awards, so we know it’s popular in the industry, while “Be a Light” has the benefit of featuring country legend Reba McEntire, who’s also co-hosting this year’s CMAs.