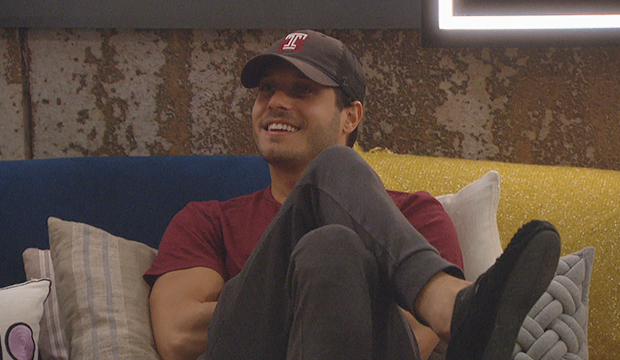 “I really need to consider who I want to evict this week,” Cody Calafiore declared at the end of Wednesday’s Veto episode of “Big Brother 22.” Cody prevailed during the hard-fought hamster wheel challenge, which now gives him the sole power to evict either Christmas Abbott and Nicole Franzel on Thursday night. Cody and Enzo Palumbo, the week’s Head of Household, are both now safe, so Cody’s decision will also reveal who completes the final three. Big stakes, Cali-Fury!

Cody added in the Diary Room, “Between Christmas and Nicole, Nicole is somebody that I’m very, very loyal to. But is loyalty what’s going to win me this game? Because the last time I played this game, loyalty got me second place and I didn’t come back to get anything short of first.” He’s referring to Season 16, in which Derrick Levasseur won in a 7–2 vote after Cody brought him to the final two, a game move that clearly still haunts him to this day.

As for the two nominees, Nicole broke down in tears after losing the Veto competition, saying, “My game could be over at this point.” Even though she and Cody have a final two deal, she knows that Cody would have a better chance at winning the $500,000 by sitting next to Christmas as opposed to sitting net to her. But would Cody really make that move against his close ally? After all, he’s adamantly been trying to send home Christmas for weeks.

Christmas summed it all up when she noted, “You never want to have your life in somebody else’s hands in the ‘Big Brother’ house and now I am at the mercy of Cody. Who knows what he’s gonna do, but I still have an opportunity to go to final three.” She concluded, “This isn’t over until I’m literally evicted from this house. So all bets are off.”

Meanwhile, HOH Enzo proclaimed, “I’m safe. I’m in the final three. Cody my guy is in the final three too now. But I would love for Cody to get rid of Nicole this week. She’s a champion.” If Nicole ends up winning the game, she’ll be the first two-time “Big Brother” winner ever. “Cody, please make the right choice here, bro. Please,” Enzo pleaded to the camera.

Who will be the next person sent to the jury house: Nicole or Christmas? Find out live on Thursday, October 22. Note that there will be a special episode this week on Friday, October 23. The yearly clip show is then scheduled for Monday, October 26, with the grand finale locked in for Wednesday, October 28.