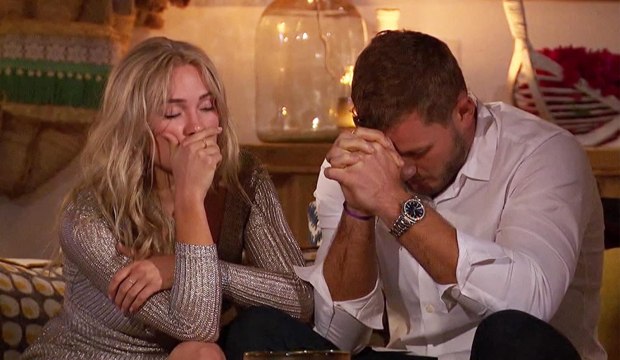 Colton Underwood‘s contract with “The Bachelor” has expired, which means he is now free to share all the secrets he couldn’t share for the past year — not even in detail in his new memoir, “The First Time: Finding Myself and Looking for Love on Reality TV.” Chief among them: His frustration with “Bachelor” production.

“I’m actually out of contract now, finally. I wasn’t when I was writing the book, obviously,” the Season 23 lead told the “Los Angeles Times.” “I wanted to follow all the rules, business-wise, and be professional. That was the hardest part for me, and I think that’s where my strongest fallout with them came. I was trying to always be professional, and I felt like at times I didn’t get that in return. I was told to be a good little boy and keep my mouth shut and it’s like, ‘Come on, guys, treat me like an adult.’ It’s not always clear what you can and can’t talk about, because it’s a mix of business and your personal life. It’s hard for me to not take things personally when your business is my personal life. You can’t tell me, ‘Oh, don’t take it personal, it’s nothing against you.’ It’s like, ‘What do you mean? It is. It’s my life.'”

In the book, which was released Tuesday, the former NFL player said he told production that it was coming “annoyingly close to crossing the line” by constantly focusing on and playing up his virginity (he was billed as the virgin Bachelor). “I just went along with it and kept my mouth shut because that was what I was told to do. I was realizing ‘I’m OK with you guys poking fun every once in a while,’ but when it becomes my narrative — when it becomes ‘Hey, let’s get this guy laid’ instead of ‘Let’s find love for him,’ that’s when it was challenging for me,” he told the paper.

Underwood felt that manipulation with his now-girlfriend Cassie Randolph, who quit the show during final three, prompting a distraught Underwood to jump a fence and disappear into the night. Randolph’s exit, according to Underwood, was sparked by production.

“There were lines crossed in my relationship with Cassie that I found out about after the show. There were things that they said and did that compromised my relationship with her. Now, it makes so much sense that she decided to leave,” he stated. “If you’re gonna make a show, at least give me a fair shot to end up with the girl that I’m falling in love with. Your job as a show is to make us come together. I understand we did [come together] at the end, but I had to take it into my own hands and be extreme with it. They value their TV show more so than the love story that they always promote. Actually, there were some things you did that drove us apart and if I didn’t stand up for myself, I probably wouldn’t be with Cassie today.”

The 28-year-old also took umbrage with the way he says producers pressured him into asking the fathers of his four finalists for permission to marry their daughters. “When I told [the producers] I felt value in asking the fathers, they wanted me to ask all four,” Underwood shared. “That was a very, very big struggle, and that was very, very hard on me. Quite frankly, at that point, I already knew where my mind was [wanting to pick Randolph].”

In particular, he did not want to ask Tayshia Adams‘ father. “I’m probably going to get in trouble for saying this, but whatever — at first, I didn’t ask, because I valued her being engaged before and I didn’t want to do that to her. I didn’t ask when I sat down with her father. And at the very end, [producers] were like, ‘You have to. You need to pull him again,'” he revealed. “By that time, it’s 12, 1 in the morning and I’m like, ‘OK, can we wrap this up?’ It’s like ‘Well, you know how to wrap this up. Go have that conversation.'”

When it came to Randolph’s father, Underwood says he decided not to ask him after reading the room and because he only wants to ask him once. But producers quickly intervened. “I think I got prompted [by producers] three or four or five times, being like, ‘Tonight’s a big night. Don’t you have a question you want to ask?'” he said. “Those are the cutthroat things. They can do a better job of taking a step back and letting the contestants have control over their love and their story.”

Underwood is hopeful that the next season of “The Bachelorette” will be different behind the scenes with now-39-year-old Clare Crawley, the oldest lead yet, asserting herself and not catering to production directives. (This will be her fifth stint on the “Bachelor” franchise, so she’s probably seen it all at his point.)

“I like the franchise, I really do. I just hope that they change,” he said. “I don’t know if that’s naive to say. But I think this year is the opportunity for it with Clare. Hopefully you don’t have to manipulate a 38-year-old grown woman to do things. Hopefully she doesn’t play any games. Clare seems like the one who will stand up and say, ‘This is what’s gonna happen, you’re gonna respect me and honor my wishes this way.'”

Despite his issues with production, Underwood makes it clear that he harbors no ill will towards the entire franchise and is friendly with various people. “Like I said, as long as they’re professional or respectful I’ll still have my working relationship with them. But for my mental health, it’s good to separate myself,” he said. “After this, I feel like I can move on and do my own thing. I’m excited for that. I don’t know exactly what the future has in store for me.”