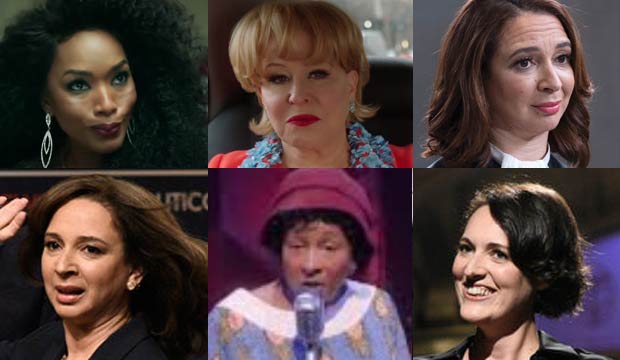 This year’s Comedy Guest Actress field features past Emmy winners, a “bad bitch” looking for her first victory and a history making double nominee. We’ve put ourselves in the shoes of voters by sitting through all six of their episode submissions to analyze who might come out on top in this tight race. Who will win at the Creative Arts Emmys on Saturday, September 19? Follow the links below for each episode analysis.

Angela Bassett is a seven-time Emmy nominee. She was previously nominated for “The Rosa Parks Story,” “American Horror Story: Coven,” “American Horror Story: Freak Show,” “Master of None,” “The Flood,” and has an additional nomination this year for narrating “The Imagineering Story.” In order to prevail for this HBO comedy, she has submitted the episode “Angela Bassett is the Baddest Bitch” for consideration: In “Bad Bitch Support Group,” Ms. Bassett portrays group leader/veteran Bad Bitch, Mo. Initially, Mo seems to mentor the “Bad Bitches” (glamorous women) as they share their struggles. But ultimately, she’s revealed to be in cahoots with a clothing brand that’s giving the women sexy-inducing medicine to boost sales.

This is Midler’s ninth Emmy nomination. She has won three times: “Bette Midler: Ol’ Red Hair is Back,” “The Tonight Show With Johnny Carson,” and “Bette Midler in Concert: Diva Las Vegas.” She has additional nominations for performances in “Gypsy,” “Murphy Brown,” and “Bette Midler: The Showgirl Must Go On.” She was also nominated for writing her specials “Ol’ Red Hair is Back” and “Diva Las Vegas.” This year she has submitted the episode “Vienna” for consideration: Hadassah Gold has spent her lifetime as Dede Standish’s Chief of Staff. But after many years of running unopposed, Hadassah and Dede’s entitlement and indolence might be the thing that loses them the race.

Rudolph is a six-time Emmy nominee. She became the first actor in Emmy history to be nominated in the same guest category twice, thanks to bids for “The Good Place” and “Saturday Night Live.” She has three previous nominations in this category, two for “Good Place” and one for “SNL.” She earned a third nomination this year for Voice Over Performance in “Big Mouth.”  For her “The Good Place” nomination, she has submitted the episode “You’ve Changed, Man” for consideration: The Judge is ready to enact her ruling, destroy the Earth and restart the universe from scratch. But the Soul Squad argues that erasing the Earth will also erase her beloved Timothy Olyphant. By her infinite wisdom and love of binge-worthy TV, The Judge decides to give humanity another chance.

Rudolph’s second Comedy Guest Actress nomination is courtesy of her impression of Vice Presidential candidate Kamala Harris. She has submitted the episode “Host: Eddie Murphy” for consideration: In a parody of this week’s Democratic Debate, Maya Rudolph plays candidate Senator Kamala Harris. Heidi Gardner, as Judy Woodruff, plays the moderator. All the original candidates are represented and surprised by an appearance by Donald Trump (Alec Baldwin).

Sykes has a whopping fourteen Emmy nominations. She won one of her four career nominations for writing “The Chris Rock Show.” She has additional nominations for “Wanda Sykes: Sick and Tired,” “Wanda Sykes: I’ma Be Me,” “Black-ish,” “Wanda Sykes: Not Normal,” and is also nominated this year in Variety Special “Tiffany Haddish: Black Mitzvah” and in Voice Over Performance for “Crank Yankers.” She has submitted the “Maisel” episode “A Jewish Girl Walks into the Apollo” for consideration: Legendary comedienne Moms Mabley prepares to perform for her hometown crowd at the Apollo.

Waller-Bridge is a seven-time Emmy nominee. Last year she won three Emmys for producing, acting, and writing “Fleabag.” She has additional nominations for writing and producing “Killing Eve,” including a Drama Series nomination this year. She has submitted the “SNL” episode “Host: Phoebe Waller-Bridge” for consideration: Phoebe performs stand up for her monologue. Parodies include Mike Pence talking about impeachment to Trump’s core group; “Love Island’s” trashy singles; “What’s Wrong With This Picture”, and Phoebe as a Duchess who talks about dating Kenan, a Black comedian. Two live performances by Taylor Swift