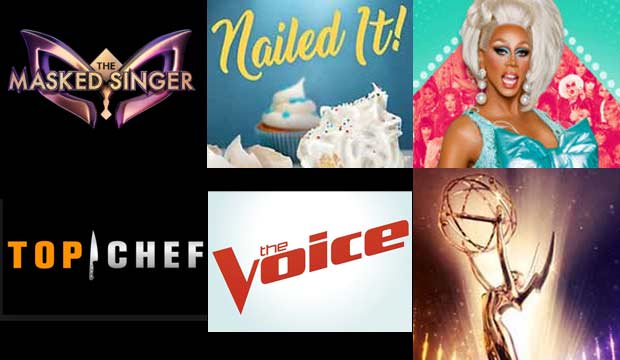 Gold Derby can exclusively reveal the episode submissions for the five nominees in the Best Competition Program category. The contenders are “The Masked Singer,” “Nailed It!,” “RuPaul’s Drag Race,” “Top Chef” and “The Voice.”

“The Masked Singer” is a first-time Emmy nominee in this category. It also has a bid for costume design. The episode entered is “The Super Nine Masked Singer Special: Groups A,B,C,” which aired April 1 on Fox.

“Nailed It!” has its second straight Emmy nomination in this category. It also has a bid for host Nicole Byer. The episode entered is “We’re Scrooged!,” which streamed November 22 on Netflix.

“RuPaul’s Drag Race” has won this Emmy category the past two consecutive years. It also has a bid for host RuPaul Charles as part of its 10 overall nominations. The episode entered is “I’m That B****,” which aired February 28 on VH1.

“Top Chef” won this Emmy category in 2010. It also has a bid for hosts Tom Colicchio and Padma Lakshmi among its four overall nominations. The episode entered is “The Jonathan Gold Standard,” which aired March 26 on Bravo.

“The Voice” has won this category four times. It has a total of six nominations this year. The episode entered is “Live Finale Part 2 (#1818),” which aired May 19 on NBC.