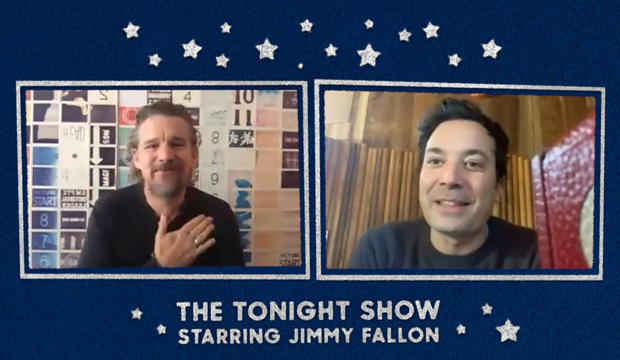 The late night talk shows and their hosts are blazing the trail for TV production in this time of COVID-19. Jimmy Fallon, Jimmy Kimmel, Trevor Noah, Stephen Colbert, Conan O’Brien, Seth Meyers, James Corden and Samantha Bee are all delivering their comedy from home — and let’s not forget the paycasters: Bill Maher and John Oliver. The show goes on even without a set or an audience.

“The Tonight Show Starring Jimmy Fallon” showrunner Gavin Purcell views this new way of producing as an exciting challenge. “I think people respond to seeing people in real time dig into their tool sets,” he tells Gold Derby in our exclusive interview. His was one of the first shows to move from full-scale production to a home edition. Purcell admits Fallon “initiated the idea.” So, with the consent of his wife and NBC, he began shooting from his Long Island home beginning in mid-March.

“It’s he and his wife. We don’t have professional cameras. We’re shooting on laptops and Zoom,” confirms Purcell. “We were lucky that (Jimmy’s wife Nancy Juvonen) is an amazing producer.” And now she’s operating an iPhone or a MacBook Pro, and she’s the only “crew member” on site. Purcell says the only tweak added to Fallon’s house was an upgrade on his wi-fi signal. “Sometimes the connection goes down and you’re like, ‘Oh my gosh, just pray to God it comes through!’ and it does.” As for the guests, sometimes they have spotty connections from their homes, and the show can’t really help. Chef David Chang drove to a liquor store mid-interview to get a better internet connection, all the while discussing his love of microwave cooking.

“The Tonight Show” tapes daily and is recorded in segments. Previously, Purcell would watch the rundown in real time in a control room and edit it for time — now it comes to him in pieces and the challenge is to not sacrifice authentic moments that interrupt the show’s game plan. When guest Ethan Hawke recently talked about wanting to buy a VW bus, Fallon told him he owned one, and excitedly walked his MacBook Pro outside to show it to him mid-interview. Sometimes his kids interrupt (his daughter lost a tooth during a segment) and sometimes Jimmy and Nancy just talk about their lives. Purcell adds, “What’s cool about these shows is the intimacy. That’s the kind of thing that people are really finding fascinating now. Every shot is not perfect, but nobody’s life is perfect now.”

All team members are working from home, including writers, producers and editors. They meet several times per day via Zoom and Purcell is proud of the staff. “They’ve done a great job pivoting to this home/work environment and we’re using everybody we used before. Remote production is not easy, especially with a show like ‘The Tonight Show,’ which is a big studio show.” Purcell credits his IT department and his editors for “going above and beyond.” When Fallon joined his band, The Roots, in a rendition of “Under Pressure,” Purcell said it took a few days to properly record, edit and mix 12 people on a Zoom stream, unlike the several minutes it would take to record live to tape on the old version of the show.

When they eventually return to the studio, Purcell feels the show is going to change a fair amount. “Authenticity and intimacy and all of that stuff, I think this time has forced everybody to change no matter what you do, the key is how do you capture those things that are important and bring them back for a new version of the life we lead,” he concludes.