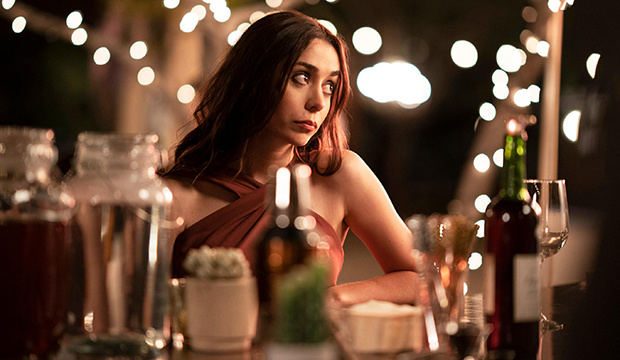 Cristin Milioti stars opposite Andy Samberg in one of this year’s most critically acclaimed comedies, “Palm Springs,” which premiered at the Sundance Film Festival in January before launching on Hulu in July. The romantic comedy delivered Hulu its highest opening weekend viewership ever for a film, with more than 8 percent of the streaming platform’s subscribers watching within its first month of release. Now, Milioti is within striking distance of her first career Golden Globe nomination for Best Film Comedy/Musical Actress.

In “Palm Springs,” Milioti plays Sarah Wilder, a distraught woman who bonds with a man named Nyles (Samberg) at her sister’s wedding. On the verge of a drunken affair, Nyles wanders into a mysterious cave, from which he cautions Sarah to stay away. Ignoring his warning, Sarah follows him in and gets sucked into a vortex that sends her into a loop, continuously repeating one of the worst days of her life alongside Nyles.

Since the film’s release, Milioti has received rave reviews for her hilarious, heartbreaking performance. Film critic Brad Newsome of the Sydney Morning Herald writes, “Milioti brings a sublime blend of vulnerability, steel and unpredictability.” Katie Smith-Wong of Flick Feast says, “With Samberg and Milioti stealing the show on and off the dance floor, it is essentially ‘Groundhog Day’ with piña coladas.”

A versatile actress and singer, Milioti has had supporting roles in multiple films, but worked mostly in theater and television prior to her breakout lead performance in “Palm Springs.” She was nominated for a Tony Award in 2012 for Best Actress in a Musical for “Once,” but lost to Audra McDonald in “Porgy and Bess.” That Broadway show also earned her a Grammy Award for Best Musical Theater Album. In 2016 she was up for Best Supporting Actress in a Movie/Miniseries for the second season of “Fargo” at the Critics’ Choice Awards, losing to her co-star Jean Smart.

“Palm Springs” currently holds a score of 83 on Metacritic based on 41 reviews. On Rotten Tomatoes it has a freshness rating of 94 percent, with a slew of reviews naming it one of the best films of 2020. Richard Roeper (Chicago Sun-Times) called it “one of the year’s best romances,” and Claudia Puig (FilmWeek) wrote, “It really exceeds at what it’s trying to do: an inventive new take on Groundhog Day. It has very likable lead performances by Andy Samberg and Cristin Milioti, and it has more on its mind than the run-of-the-mill rom-com.”

Milioti is just outside of the top 10 in our odds, but “Palm Springs” and Samberg are both predicted to score nominations, so the actress could go along for the ride. Plus, the comedy/musical races are pretty open this year. Last year, Globe voters picked Awkwafina as their favorite actress in a comedy or musical for “The Farewell.” Ana de Armas (“Knives Out”), Cate Blanchett (“Where’d You Go, Bernadette”), Beanie Feldstein (“Booksmart”) and Emma Thompson (“Late Night”) were the other nominees. 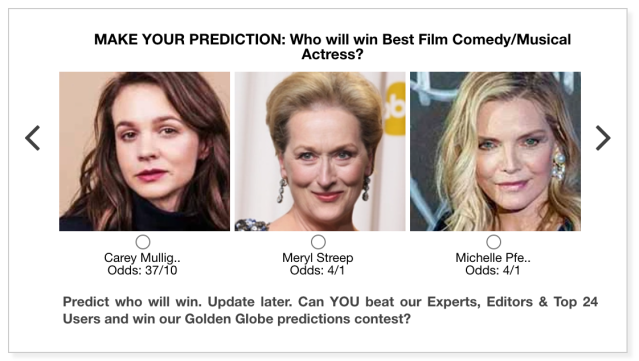