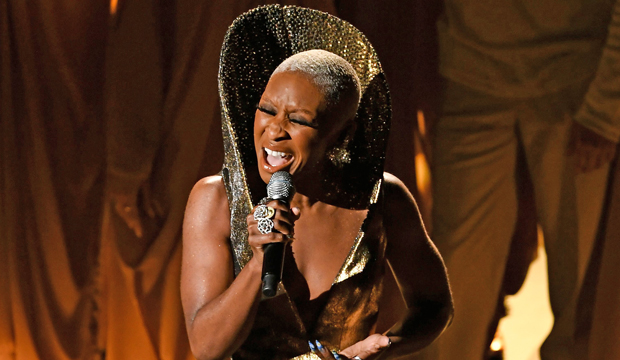 With eight musical performances to drool over, the 2020 Oscars felt more like the Grammy Awards than ever before. Of the artists who entertained the crowd during Sunday’s telecast, who gave the best performance? We tasked Oscar viewers with answering that very question and the poll results are in: Cynthia Erivo‘s powerful rendition of “Stand Up” from “Harriet” leads all performances with 26% support. “It wasn’t even a contest,” commented Gold Derby reader Jonathan Goeschl. Do you agree or disagree with those poll results? Sound off down below.

Erivo was nominated for a pair of Oscars this year: Best Actress for portraying Harriet Tubman and Best Song for co-writing “Stand Up” with Joshuah Brian Campbell. She ending up losing her two bids to Renee Zellweger (“Judy”) and Elton John & Bernie Taupin (“I’m Gonna Love Me Again” from “Rocketman”), respectively.

Four other Oscar performers nabbed double-digits in our poll results: In Memoriam singer Billie Eilish at 19%, “Lose Yourself” comeback kid Eminem at 17%, opening artist Janelle Monae at 13% and Elton John at 11%. Here’s how all eight musical acts fared, according to our readers:

8% — Idina Menzel & Aurora and “Elsas” from around the world: “Into the Unknown” from “Frozen II”

6% — Chrissy Metz: “I’m Standing with You” from “Breakthrough”