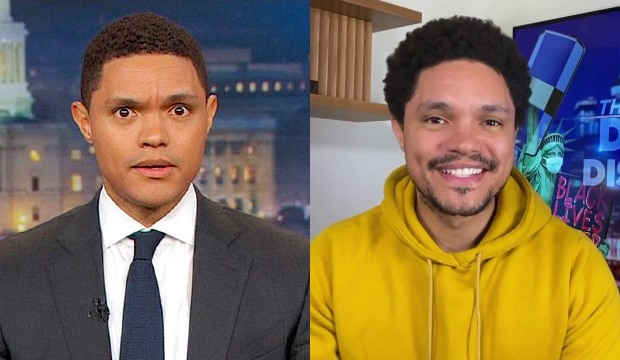 John Oliver has not had a proper challenger until now

This is the first time that it has been worth considering the possibility of an upset, as the last four years have seen landslide victories. “Last Week Tonight” was the only nominee with both Best Variety Series Writing and Best Variety Series Directing nominations in 2016. “The Late Show with Stephen Colbert” seemed to be positioning itself as a challenger in 2017, as it had both key nominations, but it curiously had no support below the line. “Last Week Tonight” had more than twice as many nominations altogether.

“Last Week Tonight” finally has a challenger with broad support this year. In addition to Writing and Directing, “The Daily Show with Trevor Noah” is also nominated for the first time for its editing and sound. The Best Variety Editing nomination is especially impressive because “The Daily Show” submitted segments from eight episodes for consideration, guaranteeing vote-splitting in a category with five nomination slots. “The Daily Show” at least has a path to victory from a statistical standpoint, which is more than any talk series aside from “Last Week Tonight” has been able to say in the last four years.

Trevor Noah has adapted better to 2020

Noah’s incarnation of the Comedy Central franchise did not grow steadily at the Emmys. Its nomination explosion this year was sudden and not remotely foreshadowed by the guild awards that were presented in January and February. The episodes attached to its nominations actually all aired since then, although this Emmy eligibility period began in June 2019. The breakthrough nominations were an endorsement from the television academy of how “The Daily Show” has responded to the tribulations of 2020.

With episodes now being filmed from Noah’s home, the show has rebranded as “The Daily Social Distancing Show” and expanded to 45 minutes, plus Noah has grown out his hair. Whereas “Last Week Tonight” looks relatively the same as it always has, thanks to its no-frills approach to delivering a top-quality product, “The Daily Show” has taken the opportunity to reinvent itself and the uncertain times have actually brought out the best in Noah as a host.

Noah takes a more personal approach than Oliver to addressing current events, which has resonated more on social media. “The Daily Show” has gained five times as many followers on Twitter than “Last Week Tonight” since the start of quarantine. Noah’s monologues are prone to go viral throughout the week, as “Last Week Tonight” prepares its weekly episode.

“The Daily Show” has an ace up its sleeve

The Creative Arts ceremonies this week admittedly hampered the narrative of an impending upset. “The Daily Show” was skunked again, while “Last Week Tonight” repeated its wins in Best Series Technical Direction, Best Variety Editing and Best Variety Series Writing. 2020 is an unprecedented year, but you might not know it from Creative Arts, where the winners were largely business as usual.

The major exceptions were in acting categories, starting with Maya Rudolph winning Best Voice-Over Performance on the first nomination for “Big Mouth” in the category, which had been won by “Family Guy” the last four years. Best Short Form Actor and Actress went to the performances in “#FreeRayshawn” by Laurence Fishburne and Jasmine Cephas Jones, representing the first wins by Quibi, a streaming service that only launched this April.

Editors, technical directors and writers still prefer John Oliver to Trevor Noah, but actors only get to chime in on talk series once, in the Best Variety Talk Series category itself. They represent a much larger branch of the academy and have demonstrated an inclination this year, between their nominations and their few winners so far, to go in a new direction.