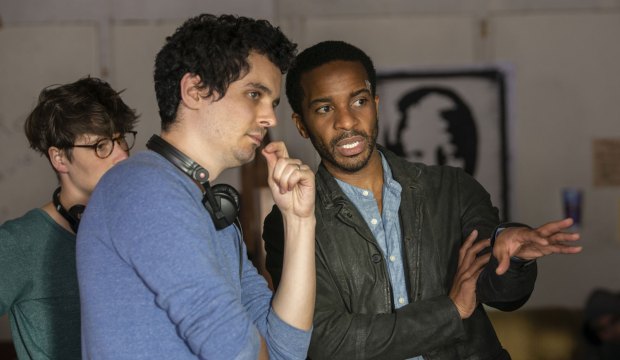 Damien Chazelle made history when he won Best Director at the Oscars for the modern movie musical “La La Land” (2016). He was 32 when he collected that trophy, which made him that category’s youngest winner in history. Just a few years later the wunderkind could follow that with a trophy or two for his work on the small screen. He’s a director and executive producer of the Netflix limited series “The Eddy.”

SEEAndre Holland (‘The Eddy’): It was ‘scary’ to act in French for the first time [EXCLUSIVE VIDEO INTERVIEW]

The eight-episode musical premiered on May 8 and it’s about — surprise, surprise — jazz, not unlike Chazelle’s “La La Land” and “Whiplash” (2014) were. This time the story follows Andre Holland as the owner of a French jazz club whose daughter (Amandla Stenberg) comes to visit. Chazelle directed the first two episodes, and he’s not the only pedigreed artist behind the camera. “The Eddy” was created by Jack Thorne, the Tony-winning writer of “Harry Potter and the Cursed Child.” And the original music is by Grammy winner Glen Ballard (Alanis Morissette‘s “Jagged Little Pill”) and Grammy nominee Randy Kerber.

The Emmys often love big-screen filmmakers making the move to the small screen. In the last 20 years, Oscar champ Mike Nichols won Best Movie/Limited Directing for both “Wit” and “Angels in America,” and Oscar winner Steven Soderbergh prevailed for “Behind the Candelabra.” Oscar nominee Lisa Cholodenko won the Emmy for “Olive Kitteridge,” and Oscar nominee Jean-Marc Vallee won for “Big Little Lies.” Susanne Bier‘s film “In a Better World” won the Oscar for Best Foreign Film for Denmark, and then she won the Emmy for helming “The Night Manager.”

But an Oscar nomination or win doesn’t automatically translate to Emmy. Just look at the last two years. Emmy darling Ryan Murphy won Best Movie/Limited Directing in 2018 for “The Assassination of Gianni Versace” over Oscar nominees Scott Frank (“Godless”), Barry Levinson (“Paterno”) and David Lynch (“Twin Peaks: The Return”). And Johan Renck won the award in 2019 for “Chernobyl” over Oscar nominees Ava DuVernay (“When They See Us“) and Stephen Frears (“A Very English Scandal”).