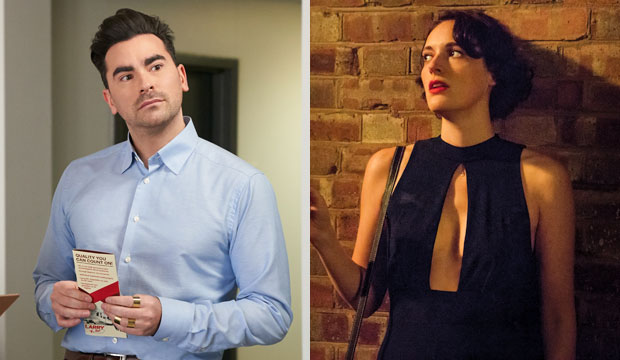 Will “Schitt’s Creek” star Dan Levy pull a Phoebe Waller-Bridge at this year’s Emmys? Last year the “Fleabag” star won awards for writing, producing and acting in the British comedy. Levy could win in the same three fields when the awards are presented virtually in September. And actually, he could win one more since he’s up for directing too.

Not only is he nominated for those awards, there’s a good chance he’ll win all four according to the combined predictions of Gold Derby’s users. As of this writing “Schitt’s Creek” gets leading 4/1 odds of winning Best Comedy Series, with majorities of our Experts, Editors and Top 24 Users all betting on the show to edge out 2018 champ “The Marvelous Mrs. Maisel.”

The race for Best Comedy Supporting Actor is closer as Levy faces Emmy darling and defending champion Tony Shalhoub for “Maisel.” But even there Levy has moved out front with leading odds of 9/2. More of the Expert journalists we’ve surveyed still say Shalhoub will repeat, but Levy is now backed by most Editors and Top Users.

SEEEugene Levy (‘Schitt’s Creek’) on being Johnny Rose: ‘I got comfortable playing someone who looked like me’ [EXCLUSIVE VIDEO INTERVIEW]

In both the writing and directing races, Levy is nominated for the series finale episode “Happy Ending,” which could prove to be aptly titled. He and co-director Andrew Cividino are the front-runners for Best Comedy Directing with 5/1 odds. And again their closest competition is “Maisel,” for the episode “It’s Comedy or Cabbage” by 2018 directing champ Amy Sherman-Palladino.

There’s a chance of a vote split in the writing category, where “Happy Ending” is up against another “Schitt’s Creek” episode, “The Presidential Suite” penned by David West Read. But we’re giving Levy’s script the heavy advantage with 5/1 odds over another farewell episode, “The Good Place” swan song “Whenever You’re Ready.” So it looks like Levy will have to get four speeches ready for Emmy night. Time for him to write a few more happy endings?