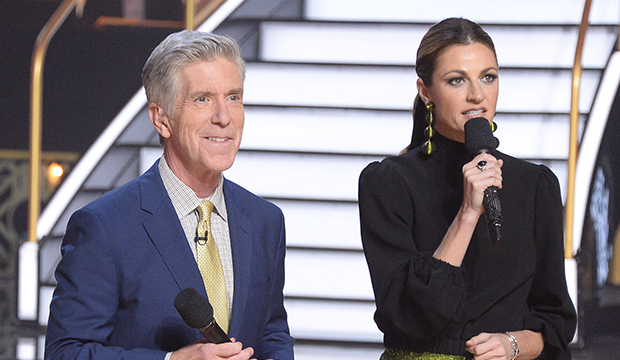 It’s mid-March, but it’s still not time to dust off your dancing shoes yet. In case you forgot, “Dancing with the Stars” will not air a spring season for the second year in a row. Though, with networks and studios taking precaution with the coronavirus outbreak, a spring season would’ve certainly been delayed had one been planned (the “Dancing” tour has already been postponed).

No spring season is the new normal now. Two years ago, we got the shortened “Athletes” installment in late April, but last year was the first time “Dancing” skipped the spring since it started the spring-fall rotation in 2007. The show returned last fall with Season 28, and it certainly feels like the fall outing per calendar year will be the regular schedule going forward — one that Tom Bergeron is cool with.

“I think that’s right for now,” he told “Entertainment Weekly” earlier this month after he was unmasked as the Taco on “The Masked Singer.” “We don’t even have a firm pickup for the fall. So I’m clueless as to what the plans are at the network for it. I think they’ve spoken optimistically about it over the past few months, but there’s nothing official yet. But that said, the show is 15 years old. It’s fine to do once a year. And that works so well in England with the mothership, ‘Strictly Come Dancing.'”

While “Dancing” has not officially been renewed for a 29th season, that feels like a formality that this point (one that would likely come in May during upfronts). ABC Entertainment President Karey Burke and Rob Mills, the network’s head of alternative programming, have both spoken about a 29th season that would air in the fall. Mills has even shared some of the celebrities he’s hoping to book, including Charlie Sheen, who declined a spot on the previous installment, and possibly another politician despite the backlash to Sean Spicer last season and in an election year, no less.

“Dancing’s” demotion from ABC’s spring lineup is not just due to age and declining ratings, but the rebirth of “American Idol” on the network. Though the revived series’ regular timeslot is Sundays-at-8, it airs in “Dancing’s” usual Mondays-at-8 slot a few times during the season and will kick off Hollywood Week with an episode on Monday, March 16. ABC will fill out its Mondays the rest of the season with a new “Bachelor” spin-off, “The Bachelor Presents: Listen to Your Heart,” which premieres Monday, April 13 at 8/7c.

And then we can start counting down the days until September.

'Big Brother 23' spoilers: Tiffany cooks up a plan for the Cookout while Brent remains…

'Big Brother 23' episode 9 recap: Did the Veto save Brent or Britini on July 28? [UPDATING LIVE…

'America's Got Talent': See all 55 Golden Buzzers on 'AGT' through the years

'Big Brother 23' spoilers: Brent comes up with a convoluted plan that must be seen to be…