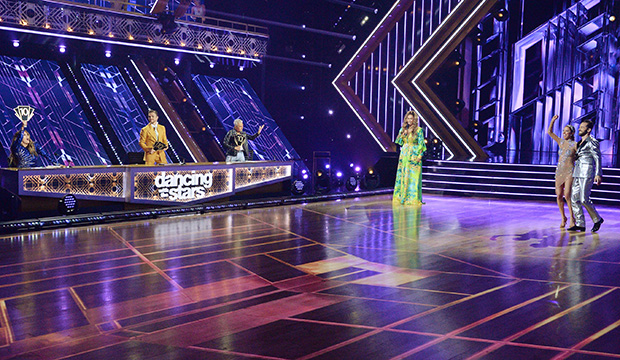 It’s all water under the bridge now for Carrie Ann Inaba, and Kaitlyn Bristowe and Artem Chigvintsev after the “Dancing with the Stars” judge gave the couple a 10 on Monday’s show following two weeks of harsh critiques. Fans speculated that Inaba was being tougher on the pair because she and Chigvintsev had dated from 2006-09 — a theory both of them find “hysterical.”

“People love looking for something,” Bristowe pointed out.

While Chigvintsev had previously said that Inaba’s comments were starting to feel “personal,” he ultimately does not think she was unfairly targeting them because of their past romance.

“I don’t think my previous relationship has anything to do with it, I’ll be honest with you, because she’s been judging me for the past however many seasons I was on the show,” he said. “So there’s no, like, personal agenda whatsoever. I don’t think it has anything to do with it. I think she just really was harsh in the sense that she saw so much more potential than what we’ve been delivering the past two weeks and she finally got things that she’s been wanting to see.”

SEE Kaitlyn Bristowe and Artem Chigvintsev remain frustrated by Carrie Ann Inaba’s ‘Dancing with the Stars’ comments: ‘It starts being a little personal’

The former Bachelorette performed an Argentine tango to Britney Spears‘ “Toxic” on Icons Night, earning raves from all three judges and a perfect 30. Inaba gave them a standing ovation and said that’s why she had been pushing them. The pair then bucked COVID protocol and ran over to Inaba to hug her.

“I’m just really happy it all worked out and it all came to a very happy place because it was challenging for two weeks getting certain critiques and going back into rehearsals and still trying to be very positive, like, ‘No, we’re gonna do it, we’re gonna break through,’” Chigvintsev continued. “It can easily fall into that kind of, like, a bad space where it’s like, ‘Can I do it? Because I don’t think I can. I’m trying!’ So, it’s good to be back! It’s good to be in a good space especially knowing that it’s the semifinals next.”

For her part, Inaba got a real kick out of the “jealous ex” narrative that developed online. “This is what I love about the ‘Bachelor’ fans and ‘Bachelorette’ fans. They can create a story around it,” she said. “And it’s weird because I totally understood what they were doing. They’re like, ‘There’s jealousy there and there’s this and that,’ because that’s what ‘The Bachelor’ and ‘Bachelorette’ is all about, right? It’s about creating stories about everybody. Look, I love Artem, I respect him, I love him and Nikki [Bella] together. I love that they just had their little baby Matteo. We’ve had Nikki on ‘The Talk,’ I’m a huge fan. There’s nothing but love, and I thought it was hysterical. So none of it bothers me.”

The judge had previously called out trolls for “bullying” her for her judging. She reiterated that she will “not stand for bullying of me or anyone,” but welcomes civil dialogue with fans. “I am OK with passion and I am OK with discussion,” she said. “How you direct your passion, though, not only here on ‘Dancing with the Stars’ but in the world in general, we all need to be careful with and we need to check ourselves. Dialogue and trying to understand the other person’s point of view is very important to me.”