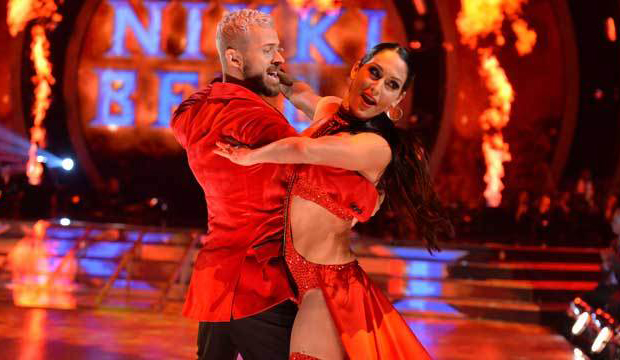 Artem Chigvintsev was unexpectedly dropped from “Dancing with the Stars” last season, and while there is no word yet on the Season 29 pro lineup, his Season 25 partner-turned-fiancée Nikki Bella is hoping he makes a triumphant return.

“I’m really excited to have the show come back on air and I’m praying and hoping that Artem is a part of the cast again,” the former WWE star said on Tuesday’s “The Bellas Podcast.” “How cool would it be if him and Kaitlyn [Bristowe] danced together? Why I think they would make such a good duo is because she has such a similar personality to me. Artem would know how to handle her but she would bring such amazing life out of Artem, and I think they could create magic on the dance floor.”

Bristowe, the Season 11 Bachelorette, is the only confirmed celebrity thus far. The full cast is typically announced in late August.

Bella, who is due with the couple’s son any minute now, noted the fan outrage last summer after Chigvintsev’s dismissal. Reigning champ Sharna Burgess was not invited back last season either to the shock of viewers. Neither pro was expecting the turn of events.

“People really missed his presence and he’s just an incredible dancer and he’s always an incredible partner too. He truly knows how to showcase the celebrity and he’s an incredible choreographer,” Bella continued. “I’m praying and hoping that he’s back this season. Even for him, I just know how much he misses dancing and I know he would love to be back on the show so it would be amazing to see him with Kaitlyn or some other woman. It would just be fun to experience it now as his fiancée because I’ve danced with him.”

Though the pro lineup is still TBD, there’s already been one cast twist: Tom Bergeron and Erin Andrews were fired two weeks ago in favor of new host and executive producer Tyra Banks. The “Total Bellas” star has high hopes for the change and the new season, which is looking to return in September with COVID-19 safety protocols in place.

“‘Dancing with the Stars is probably going to have such incredible ratings this season, like, one of their top seasons yet because I feel like right now in the world, especially with all of us being in quarantine and still in lockdown, we need a new show that’s fresh that we can get hooked onto every week,” Bella said. “The people at home, we need something like this.”

“Dancing” will air in the fall on Mondays at 8/7c on ABC.