Kaitlyn Bristowe won “Dancing with the Stars” season 29 in an upset victory over “Catfish” star Nev Schulman and “One Day at a Time” actress Justina Machado, who had been the top two in our predictions going into finale night. That makes this the second season in a row with a “Bachelorette” star claiming the Mirror Ball Trophy following Hannah Brown‘s triumph in season 28. But not all reality stars are created equal. We asked our readers who is the better dancer, and their answer was pretty decisive. Scroll down to see our complete poll results.

Even before the finale aired, Bristowe was ahead of Brown by one important metric: the judges’ scores. Though Bristowe couldn’t catch a break with Carrie Ann Inaba for a while there, she ultimately had a higher average: 26.4 out of 30 per dance over Brown’s 25.6. But the numbers weren’t nearly that close when fans had their say. Almost two-thirds of respondents (63%) think Bristowe was better on the dance floor compared to 37% for Brown.

One thing they both had in common was the support of “Bachelor Nation.” The long-running ABC reality show has a legion of fans, and since half the results on “DWTS” are decided by fans voting at home, that support was able to supersede the judges’ scores. In Brown’s season, she was the second highest-scoring celeb overall behind Ally Brooke, but her fans put her over the top. And this year Bristowe was just a hair behind Schulman on the overall judges’ leaderboard, but Bristowe ended up in first place while Schulman had to settle for the silver.

What did you think of Brown and Bristowe’s back-to-back wins? Were they both well-deserved? 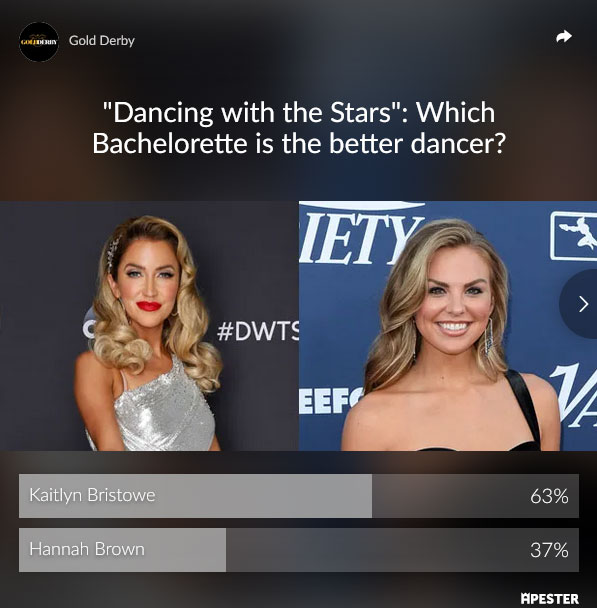