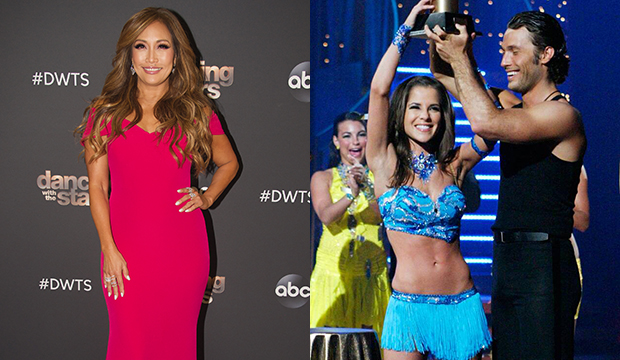 Carrie Ann Inaba has a belated apology for Kelly Monaco. In an interview celebrating the 15th anniversary of “Dancing with the Stars'” series premiere, which was Monday, the judge was taken aback by the “abrasive” critique she gave Monaco for her debut dance.

After the “General Hospital” star performed a waltz with partner Alec Mazo, Inaba sternly told her, “Kelly, I didn’t enjoy your dancing. You looked very stiff and you looked very refined. I appreciated your carriage, but it was very stiff. And it wasn’t enjoyable to watch.”

The audience immediately booed Inaba, who now says she didn’t realize how harsh she had come off.

“I was like, Whoa, damn, Carrie Ann! Damn!” Inaba told Yahoo Entertainment. “I was shocked at how abrasive the words sounded once they came out of my mouth because I was meaning them with, like, compassion, but they didn’t come out with compassion. And that’s been a huge lesson of being a judge is you really have to be careful how you wrap your words.”

Inaba then addressed Monaco directly. “Kelly Monaco, I just have to apologize to you. I mean, forgive me. What I did — what I said was horrible, but I was just a baby judge and I was still learning how to do it,” she said. “If I could do a remake, I would say, ‘There’s things we could work on here, but there’s a lot of potential.’ … I love you, Kelly!”

Monaco went on to become the inaugural “Dancing” champ after scoring the first and only perfect 30 of the six-episode season in the finale. But backlash ensued because John O’Hurley had been the better dancer and higher scorer during the season, prompting a dance-off that September, which the “Seinfeld” star won. Inaba also concedes that the rematch was a mistake.

“I don’t think that was a good idea,” she stated. “I think the winner should always just be the winner. Good, bad or whether you agree or disagree, too bad. That’s the way it should be.”

If only everyone knew back then that Bobby Bones would eventually win this show.

Monaco did get another stab  at a second Mirrorball trophy when she returned for the all-stars season in 2012. Partnered with Val Chmerkovskiy, she finished in third place behind winner Melissa Rycroft, and runner-up and Season 8 champ Shawn Johnson.