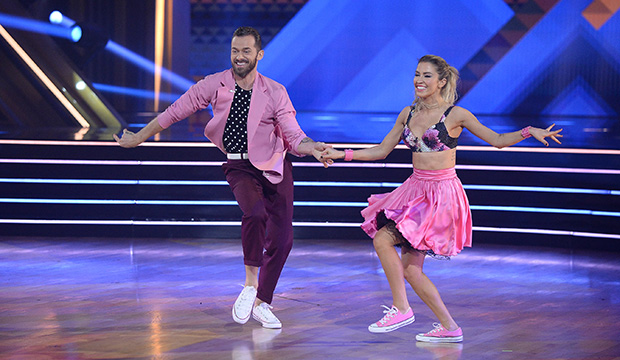 Kaitlyn Bristowe and Artem Chigvintsev received another round of negative critiques from Carrie Ann Inaba on Monday’s “Dancing with the Stars” and they remain as perplexed by them as you are.

“At this point, it starts being a little personal, I feel like,” Chigvintsev told “Entertainment Tonight.” “I feel it’s definitely, maybe not a different standard, but I feel like it’s different expectations. I don’t know. I’m watching back the dance itself. I’s like, ‘Oh, you can kick sharper!’ Well, I can say that about everybody who dances on the show today. I don’t know. It’s really odd.”

The pair opened Monday’s episode with a jive, receiving positive, helpful remarks from Derek Hough and Bruno Tonioli. Inaba questioned if Bristowe did a move on her own; when she said no, Inaba said she was going to dock her a point for a lift. Bristowe and Chigvintsev argued, but Inaba said she was going to “fight” for calling it a lift. They received a 25. (Later, Tonioli gave them a maximum three additional points for the samba relay.)

Inaba’s comments come a week after she said she felt like Bristowe “gave up” during her performance, after which the former Bachelorette cried.

Bristowe is mostly flummoxed by Inaba’s intentions because she doesn’t find her comments constructive like she does with Hough’s and Tonioli’s. She also wonders if Inaba is tough on her like she was on reigning champ Hannah Brown because of their shared “Bachelorette” history.

“I just want to know where it comes from. Is it from a place where you believe in us and you want us to do better?” Bristowe said. “Is it coming from a place of, ‘I was hard on Hannah and you’re another ‘Bachelor’ girl’? Where is it coming from and how are we supposed to take it and bring it into our next rehearsal? What do you want us to channel and use from it? It’s very hard to understand that. Derek says things and I’m like, ‘Great! Oh my gosh, I could work on that. Let’s use that next time.’ Same with Bruno. And when Carrie Ann says things, I’m like, ‘What do you want us to do with that?'”

Bristowe, who wants to have the judge on her “Off the Vine” podcast to talk about it, added that just like last week, others backstage were stumped by Inaba’s remarks as well. “It’s always reassuring to talk to other people and have them asking those same questions because we come back and we’re like, ‘Huh?'” she noted. “We’re good at accepting constructive criticism. We’re like, ‘OK, great, now let’s apply it. Thank you for the wonderful feedback.’ With this one it’s like, ‘Huh? OK?'”

Chigvintsev admits that Inaba’s critiques are “discouraging,” but they’ve realized that she may never be pleased with them. “At this point right now, we just feel like we’re never going to make her happy. It feels really discouraging, in a sense, to come back next week,” he said. “I was literally wanting to have earmuffs and put it on top of [Bristowe’s] head.”