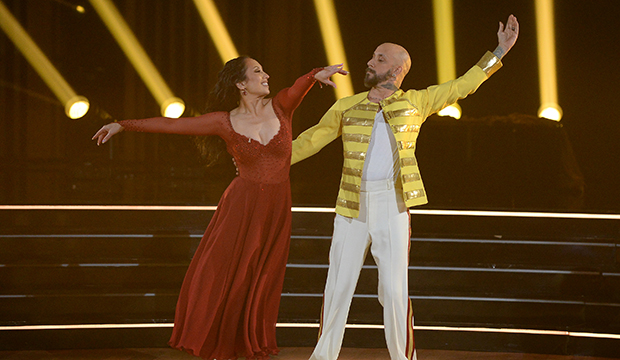 AJ McLean and Cheryl Burke were eliminated on Monday’s “Dancing with the Stars,” one week shy of the semifinal, but the pro is more frustrated by the judges’ scoring than their unfortunate fate.

“There’s rules in ballroom, and as far a I’m concerned, this is a ballroom show, I thought,” Burke told “Entertainment Tonight” (watch below). “What are the rules? What are you expecting? Are the rules the same as when Len [Goodman] was here or is it different? Is this a ballroom competition or is this not?”

The two-time pro feels that the judges are inconsistent with their critiques and scoring. “It’s just not consistent as far as, OK, you can’t break hold in quickstep yet you’re giving out perfect scores when people are breaking hold,” she noted. “What are the rules? Same thing with the tango. You’re not supposed to break hold.”

Burke believes the celebrities are being judged against themselves, not each other, but she wishes the judges adhered to the same ballroom standards across the board.

“I do not believe AJ and Nelly, for example, are on the same plane. Absolutely not. If AJ had done what Nelly had done, they probably wouldn’t have given him the same score. They do put people they think have dance experience up on a different pedestal. I get it. And they just push for greatness,” she stated. “But I guess what’s frustrating is not getting the ‘Thank you for having body contact when you’re in frame.’ For me, a perfect score is a perfect score, especially in a ballroom dance where you’re not supposed to break hold — you better have a perfect frame with body contact. There are just rules.”

SEE Cheryl Burke might call it quits on ‘Dancing with the Stars’ soon: ‘Time to hang up those shoes’

McLean and Burke received a 23 for their Viennese waltz to Queen‘s “Somebody to Love” on Icons Night after the Backstreet Boy fumbled a move early on. It was the lowest individual score of the night, but they later earned two more points after winning their jive dance-off, bringing their total score to 25, the second lowest behind Nelly and Daniella Kagarach‘s 24. They ended up in the bottom two with Johnny Weir and Britt Stewart, who received one of the night’s two perfect 30s (Kaitlyn Bristowe and Artem Chigvintsev got the other). While Derek Hough opted to save McLean, Bruno Tonioli and Carrie Ann Inaba favored the Olympic figure skater.

Burke, who’s hinted at retirement, was also disappointed because she had the pair’s semifinal dances planned out already, something she never does (perhaps that was a jinx). “I already had his other two routines choreographed for the semifinals,” she revealed. “Normally I’m not that confident going in — I never wanna be — but I was like, ‘For sure, there’s no way [we’ll get eliminated].'”

As for McLean, he’s proud of the way he recovered after his flub and is grateful for the experience.

“I’ve always been one to bow out from whatever the situation is with ease and grace and with a lot of gratitude. Honest to God, I’ve made a lot of great friends here, both on the stage and off the stage,” he said. “It still sucks. It’s a major bummer, but there’s also kind of a sense of relief and calmness as well, because life goes on. And my wife has been holding down the fort like a trooper… because this is seven days a week, every week.”