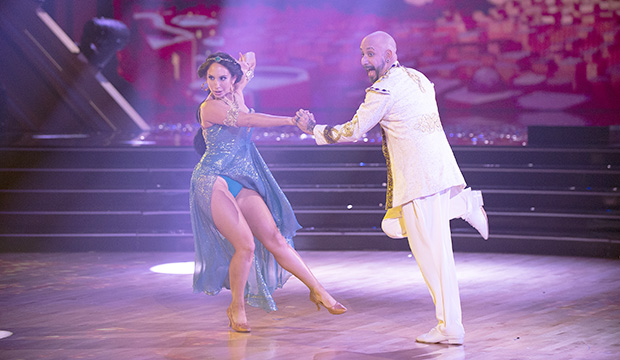 The third time has been anything but a charm for “Dancing with the Stars” pros, but you hope Cheryl Burke can become just the second pro to win a third Mirrorball trophy.

Burke is one of three two-time winners competing this season, along with Val Chmerkovskiy and Peta Murgatroyd, and 43 percent of you want her to notch a third win first. Derek Hough, who is now a judge on the show, owns the most Mirrorballs, at a whopping six, and no one else has won more than two (Burke, Chmerkovskiy and Murgatroyd are three of six pros with two victories).

The result isn’t that surprising since Burke has the most seniority and the longest gap since her last win of the three. Now in her 23rd season, she won on her very first try, Season 2 with Drew Lachey, and defended her crown the following season with Emmitt Smith, becoming the first two-time champ. She’s since had two second-place finishes (Gilles Marini, Season 8; and Rob Kardashian, Season 13) and three third-place finishes (Cristian de la Fuente, Season 6; William Levy, Season 14; and Jack Osbourne, Season 17).

SEE ‘Dancing with the Stars’ recap: Who went from zero to hero on Disney Night?

Burke is partnered with Backstreet Boy AJ McLean this season, and they’ve improved their score every week so far, currently in a three-way tie for the fifth-highest average score of the season.

With 36 percent of the vote, Chmerkovskiy, who’s in his 16th season, came in second. He got his twin wins in Season 20 with Rumer Willis and Season 23 with Laurie Hernandez, along with one second-place finish with Zendaya in Season 16 and four third-place finishes with Kelly Monaco (Season 15), Janel Parrish (Season 19), Ginger Zee (Season 22) and Normani Kordei (Season 24). After a dip last week, Chmerkovskiy and “Cheer” coach Monica Aldama rebounded this week with their Viennese waltz, earning a 21.

Murgatroyd received the remaining 21 percent of the vote. She won Season 14 with Donald Driver and Season 22 with Nyle DiMarco, and has zero second- or third-place finishes. And considering how Murgatroyd, now in her 13th season, and Vernon Davis have been lighting up the floor, even if the Super Bowl champ isn’t the most technically proficient yet, she could easily find herself maintaining a perfect record in the final.