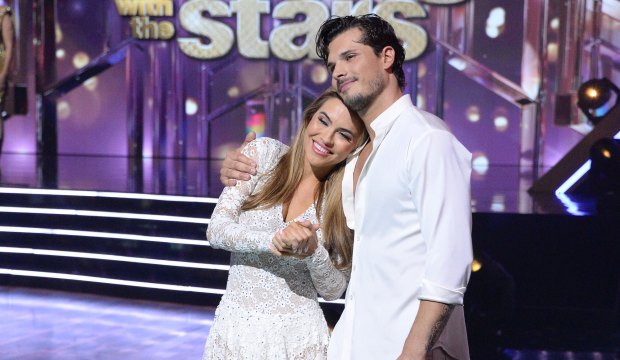 Chrishell Stause has been safe every week thus far on “Dancing with the Stars,” but she’s also the lowest-scoring celeb remaining after six weeks of competition. Will she be done in by “Villains Night”? According to the combined predictions of Gold Derby users, she’s the likeliest celebrity to be sent home.

As of this writing Stause gets leading 7/2 odds of being eliminated. She got her best scores ever last week on “Top 11” night, but she performed a contemporary routine and that emotive style typically gives celebs a much-needed bump in their scores (as was also the case the week earlier when Johnny Weir topped the judges’ leaderboard).

SEEYes, ‘Dancing with the Stars’ will have a double elimination this season, and it’ll happen at a very apt time

This week, however, she’ll be dancing a paso doble inspired by “Maleficent.” It’s a difficult, combative style that requires balance, intensity and technique, and she had trouble with a somewhat similar tango at the start of the season. The paso has also tripped up other celebs, resulting in low scores for Carole Baskin, Nelly and Anne Heche in previous weeks.

But it’s possible that Stause will have a breakthrough with the paso just like Nelly had with the samba on “’80s Night.” Or if Stause does land at the bottom of the leaderboard, her fans could keep her safe from elimination. If not her, the next most likely celeb to get the axe is in fact Nelly, who gets 4/1 odds of being sent home. He’s the second-lowest scoring dancer left in the competition, though his scores have been trending upwards and he hasn’t been in the bottom two yet this season either.

Do you agree with our odds that Stause or Nelly is the likeliest to go, or are we in for a surprise elimination?