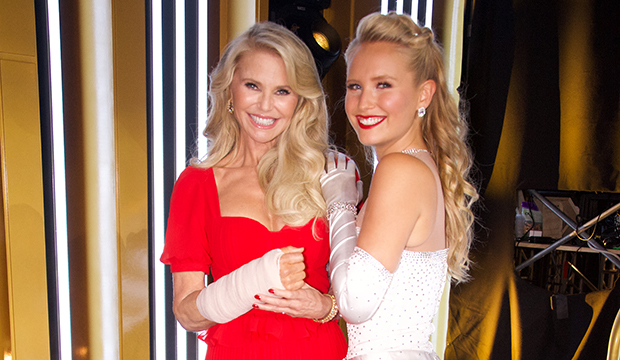 It’s a good thing there’s no spring season of “Dancing with the Stars” again because if the producers indeed want to give Christie Brinkley another shot, she might not actually be ready to go yet.

The supermodel, who dropped out of Season 28 after breaking her arm days before the premiere in the fall, reveals that her injury has not fully healed and she’ll undergo another procedure on Friday. “I’m going to get PRP and some sort of manipulation to my shoulder, my wrist and my thumb,” Brinkley told “People Now” on Wednesday. “It’s still healing, but not fast enough. I mean, it’s been four months.”

PRP is platelet-rich plasma therapy, a treatment commonly used by athletes to accelerate healing with injections of a concentration of a patient’s own platelets.

SEE ‘Dancing with the Stars’ is eyeing these celebs for Season 29 — and be warned, political figures are not ruled out

During rehearsals in September, Brinkley tripped over her partner Val Chermkovskiy‘s foot and broke her right arm, requiring emergency surgery. Her daughter, Sailor Brinkley-Cook, replaced her and finished in ninth place. In December, Rob Mills, ABC Entertainment’s senior VP of alternative series, specials and late-night programming, said he would “love to see her back dancing in the ballroom” on Season 29 in the fall.

Brinkley attended a few tapings to cheer on her daughter with a massive cast, but she’s yet to regain the full range of motion in her arm. In an Instagram post last week, she shared that “my broken arm and frozen shoulder affected my whole body so I still have lots of work to do to regain my strength and limberness and flexibility.” The 65-year-old is now turning to PRP, which she had previously used on her hip when she performed in “Chicago,” because she’s scheduled to be the ringmaster of the Big Apple Circus from Jan. 30 through Feb. 1 and needs to be able to extend her arm.

“A ringmaster needs to be able to do this [raises arms]. For those [promotional] pictures, I had to literally lift my arms up, hold it, hold it,” she revealed. “I’ve done PRP before — when I was doing ‘Chicago’ the musical, I had to do a little PRP on my hip — and it worked. It’s really good stuff.”