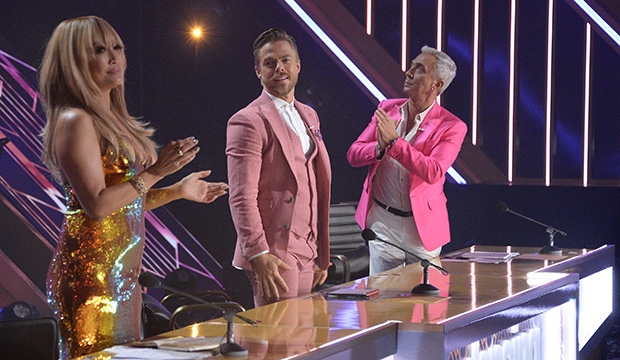 Derek Hough was in put in the hot seat on Tuesday’s “Dancing with the Stars” as he was forced to cast the deciding judges’ vote on who to save between Carole Baskin and Charles Oakley while the live show was drawing to a close. And yes, he was feeling the pressure.

After Carrie Ann Inaba picked Baskin and her partner Pasha Pashkov, and Bruno Tonioli chose Oakley and his partner Emma Slater, host Tyra Banks repeatedly implored Hough to cast the tiebreaker “quickly.” The six-time champ rapidly spouted, “Charles, I love you so much. The couple I’m gonna save is Carole and Pasha.”

Some fans are upset Hough chose the controversial “Tiger King” star over the NBA legend, exacerbated by the fact that he didn’t — or more like couldn’t — explain why as the show was running up against the clock. The reason he picked Baskin, he says, is because she had improved more than Oakley had over the two weeks; Baskin earned a 16 for her Viennese waltz, five points higher than her Week 1 score, while Oakley received a 15 — tied for the lowest of the night — for his cha-cha, a three-point improvement from last week. “It really was the progress that [Baskin] had made,” Hough explained. “I had to look at it from that perspective.”

The former pro hopes he’ll be able to go into more detail not only in his votes but in his critiques as the field shrinks in the coming weeks and there’s more airtime. “There are definitely moments where I’d love to say, ‘Choreographically, try this approach,'” he said. “Sometimes, that will be said off-screen [but] I genuinely want to help people improve.”

Plus, he won’t hold contestants’ fates in his hands every week. While head judge Len Goodman, whom Hough replaced this season after Goodman was unable to travel due to COVID-19 restrictions, had the final say last season in split votes, the onus won’t always be on Hough. “It’ll trade off, but I want to thank everyone for leaving it up to me!” Hough quipped.

And if you miss seeing Hough, who left after Season 23 four years ago, on the dance floor, you’re in luck. There are plans for him to perform at some point — safely, of course. “We’re trying to work it out, figure it out. Obviously, there are limitations [due to COVID], but I enjoy limitations,” he shared. “They force you to be creative. It’ll be further along [into the season] when there’s time.”