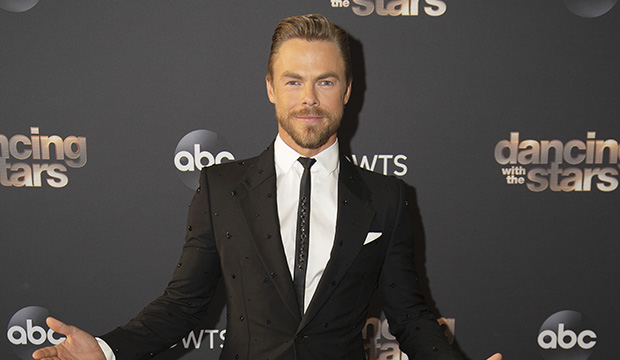 Derek Hough is lacing up his dancing shoes again: The former pro and new “Dancing with the Stars” judge will perform on the Oct. 19 episode, ABC announced Wednesday during its “VirtuFALL” virtual panel for the show.

The six-time champ will perform a routine with his girlfriend and former “Dancing” troupe member Hayley Erbert. It’ll be his first performance on the show since he placed sixth with Marilu Henner on the 23rd season in 2016. Hough departed after that for NBC’s “World of Dance,” but he returned to his old stomping grounds as a judge this season to replace Len Goodman, who was unable to travel to Los Angeles due to COVID-19 restrictions.

During the panel, the two-time Emmy winner, who had teased his future performance last week, could hardly contain his excitement about the number. “I’m very, very excited and I’m even more excited that I’ll be dancing with my lovely girlfriend, my love,” he gushed, adding that they had rehearsed Tuesday. “We woke up this morning very sore. We were like, ‘OK, we have three weeks to make this happen.'”

Hough is also grateful for the opportunity to hit the parquet again on the show that made him a household name 13 years ago and vows to “bring my all.” “I walked into the ballroom by myself the other day when it was empty during like a lunch break … and I was just like, ‘Wow, the memories.’ The nostalgia that I felt, just like, ‘This happened here, this moment happened here.’ Being a part of the show has been such a dream and I’m so thankful for it. And to have the honor and the pleasure to perform once again in this sacred place, it really is a pleasure. I certainly don’t wanna disappoint. I’m gonna bring my all,” he stated. “My M.O. is entertaining and bringing joy to people, and that’s it. I’m so happy I’m able to do that on this show.”

Because of the pandemic, “Dancing” has shelved the band and extra performances this season. Thus far, only the contestants have performed. If there are no surprise eliminations (or non-eliminations), the Oct. 19 episode will feature the top 11 couples.

Hough and Erbert previously performed together on ABC’s two “Disney Family Singalong” specials in the spring.