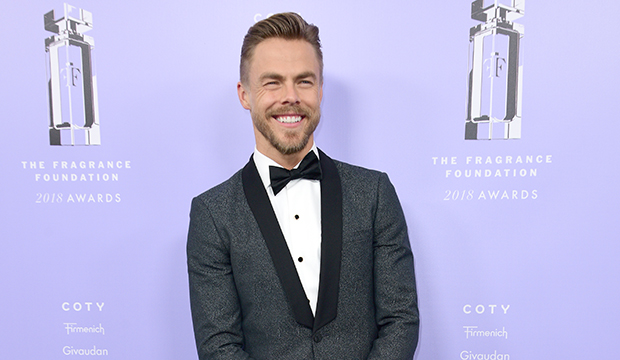 Derek Hough may have moved on from “Dancing with the Stars,” but he too was stunned about Tom Bergeron‘s and Erin Andrews‘ sudden exits from the series.

“I was pretty shocked,” Hough told Bevy Smith on Tuesday’s “Bevelations” on SiriusXM (listen below). “I think Tom Bergeron is such a staple of ‘Dancing with the Stars, and he’s a good friend of mine. He’s just a good man. He’s been there from the beginning, and you know he’s just a great guy.”

Bergeron and Andrews were dropped from the show on July 13 amid a revamp to take it in a “new creative direction.” Tyra Banks was announced as the new host and executive producer the next day.

While Hough, who left “Dancing” in 2016 after 17 seasons and a record six wins, was surprised by the shake-up, he also knows that it’s part of the fickle nature of showbiz. “Nothing is certain,” he added. “And there’s always those efforts to sort of switch things up, so you look at that, and it’s also understandable, I think.”

The “World of Dance” judge also feels “optimistic” about Banks, whom he’s met a few times, and hopes “Dancing” 2.0 succeeds.

“I think she’ll do fantastic. As far as my history and my friendship, I was definitely shocked about Tom Bergeron,” he continued. “For me, I’m always sort of a cheerleader for the show to succeed … especially for shows I’ve been a part of, that I hold dear to my heart. I want ‘Dancing with the Stars’ to succeed and do well, and I really hope it does.”

Hough joins a chorus of “Dancing” players who were taken aback by the news, including judge Carrie Ann Inaba (don’t worry — the judges are staying), fellow pro Peta Murgatroyd and former champ Alfonso Ribeiro, who suggested the show should’ve been canceled instead.