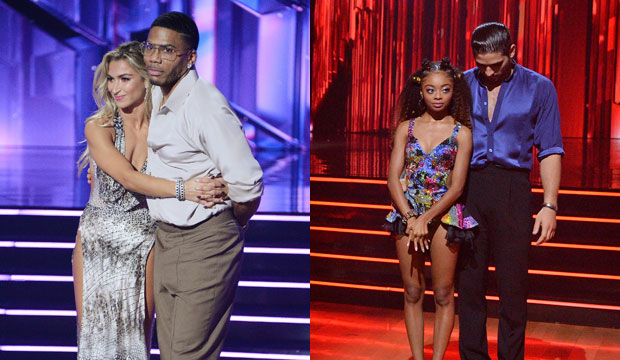 Last week’s “Double Elimination Night” on “Dancing with the Stars” was a dramatic event with Jeannie Mai‘s sudden withdrawal due to illness followed by Chrishell Stause‘s elimination. That leaves seven celebs in the competition for “Icons Night” and less room for error than ever before. So who will be the next competitor on the chopping block?

According to the combined predictions of Gold Derby users, rapper Nelly is the most likely to go home with leading 10/3 odds of elimination. He’s the lowest-scoring contestant remaining in the competition, just like Stause was when she was sent home last week. However, Nelly also seems to have a pretty strong fan base, judging from the fact that he has never been in the bottom two when viewer votes have been added to the judges’ scores — not even last week when he got the lowest judges’ score by a significant margin. So there’s a decent chance his fans will continue to rally around him.

SEE‘Dancing with the Stars’ Week 9 has some, uh, iconic routines and dance-offs on deck — and 1 couple has immunity

If not Nelly, the next most likely celeb to leave the competition is Disney Channel actress Skai Jackson with 4/1 odds. She has been hit-and-miss with the judges, so her cumulative score over the course of the season hasn’t been that great compared to her rivals, but when she’s on she’s a force to be reckoned with. She has topped the judges’ leaderboard twice this season. And she has had strong fan support before: when she dropped to the bottom on “Top 11” night, the viewing audience kept her safe.

But how reliable is that support? When Jackson was in the middle of the leaderboard on “Double Elimination Night” she did land in the bottom two, with the judges voting unanimously to save her over Stause. Perhaps her fans thought she would be safe and got complacent, a mistake they probably won’t make on “Icons Night” now that they’ve seen her in peril. But it wouldn’t hurt if she got scores so good again that she’s insulated from danger.

Do you agree with our odds that Nelly and Jackson have the most to worry about, or is there anyone you think might be a surprise elimination?