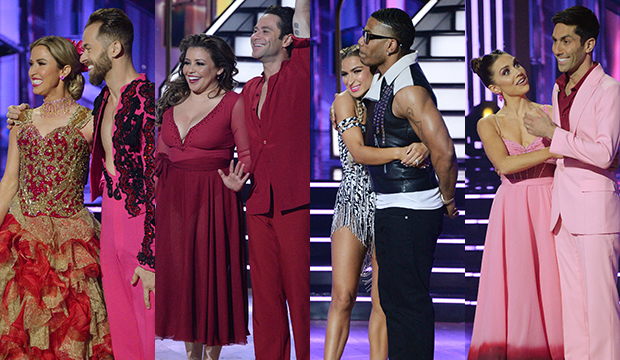 Not sure who had this “Dancing with the Stars” final four lineup at the beginning of the season, but if you did, you should go to Las Vegas (after COVID, duh).

Kaitlyn Bristowe, Justina Machado, Nelly and Nev Schulman will duke it out for the Mirrorball trophy on Monday’s finale, during which they will perform two routines, a redo of their favorite dance and the highly anticipated freestyle. Schulman is the odds-on favorite to take it all and has been the top scorer of the season, but is the “Catfish” host as locked in as it seems?

Let’s size up the final four.

Kaitlyn Bristowe and Artem Chigvintsev
For her: Bristowe is one of the best technical dancers of the season and is peaking at the right time after her drama with Carrie Ann Inaba ended in the quarterfinal. Like her fellow Bachelorette and reigning champ Hannah Brown, she’s never hit the bottom two, so Bachelor Nation is here for her as well. Plus, both she and Chigvintsev have redemption arcs: They were originally supposed to be paired together in 2015, but “Bachelor” creator Mike Fleiss allegedly intervened, and Chigvintsev was unceremoniously dropped last season before being asked to return this year.

Needs to work on: Characterization and maintaining intensity. Bristowe always has the steps down pat, but the performance aspect isn’t always completely there. Inaba’s critique that Bristowe felt like she “gave up” in her paso doble was too harsh, but she does need to attack and live in her performances more to create that emotional connection with viewers.

Why she might win: She’s got the skills and a proven winning fan base behind her. But could the fact that we just had a Bachelorette win hurt her?

Justina Machado and Sasha Farber
For her: The “One Day at a Time” star is by far the most fun dancer to watch this season. She just radiates pure joy when she dances, and at the end of the day, that’s what we want to get out of this. Oh, and she’s not too shabby of a dancer either. Machado is one of those contestants who may not have been a household name when the season started but has won over fans with her infectious performances week in and week out.

Needs to work on: Machado launches herself so wholeheartedly into her dances, but she still needs some polish and finish for a truly clean routine. The actress also landed in the bottom three in the semifinal, perhaps a sign that she’s not pulling in the votes — or at least enough votes compared to her rivals.

Why she might win: Her personality and connection with the audience. It’s hard to find anyone who doesn’t like watching Machado dance. And her bottom three appearance could be a blessing in disguise: It might spur fans to rally and vote for her to win now.

Nelly and Daniella Karagach
For him: Underdog status. It’s no secret that Nelly is the weakest dancer of the final four. He probably won’t ever be as great of a technical dancer as Bristowe or Schulman, but it’s not for a lack of effort. The rapper has improved a lot (this is not a Bobby Bones situation) and has delivered some truly endearing and entertaining routines. And he’s got the fan base — he’s never been in the bottom two despite having the lowest score the past three weeks.

Needs to work on: Refining the technical elements. Picking the samba to redo in the finale is a baller move since it’s one of the harder dances, but Nelly has a natural groove for the rolls, so if he can zero in on the details, he’ll be set.

Why he might win: Again, his underdog status. While the other three finalists were all strong out of the gate one way or another that you could picture them making the final, Nelly was not. Like, if you had asked someone at the beginning of the season which turn-of-the-millennium music superstar will make the final, they probably would’ve said AJ McLean. Nelly has gotten better throughout the season by his own standards — as the judges have said, they judge people against themselves, not against the other contestants — and he has a winning combo of growth arc, fan base and charming performances. Lest we forget, he’s also performing a medley of his greatest hits during the finale, which could fuel enough nostalgia within viewers to vote for him.

SEE Did the ‘Dancing with the Stars’ judges go overboard with 8 perfect scores in the semifinal?

Nev Schulman and Jenna Johnson
For him: Arguably the best dancer of the season, Schulman grabbed the first 30 of the season in Week 7 and hasn’t done anything since to relinquish his front-runner status. He’s redoing the dance that earned him that 30, the “Black Swan” paso doble, so unless he unexpectedly flops, expect more perfect scores.

Needs to work on: As technically proficient as he is, Schulman can at times dance within himself, like he’s so good — and we’re so awed by him being good — that he loses himself in the steps. He should take a page out of Machado’s book and dance bigger and open up more.

Why he might win: Would anyone be surprised if Schulman won? He’s the best dancer left, hasn’t had a major misstep (no pun intended) or a weird tiff with a judge, and hasn’t been in the bottom two. He would be the winner on paper, but we all know what happened two years ago. Johnson is also the only one of the four pros who’s won — yes, it was the shortened “Athletes” season, but a win’s a win — so she knows what it takes.